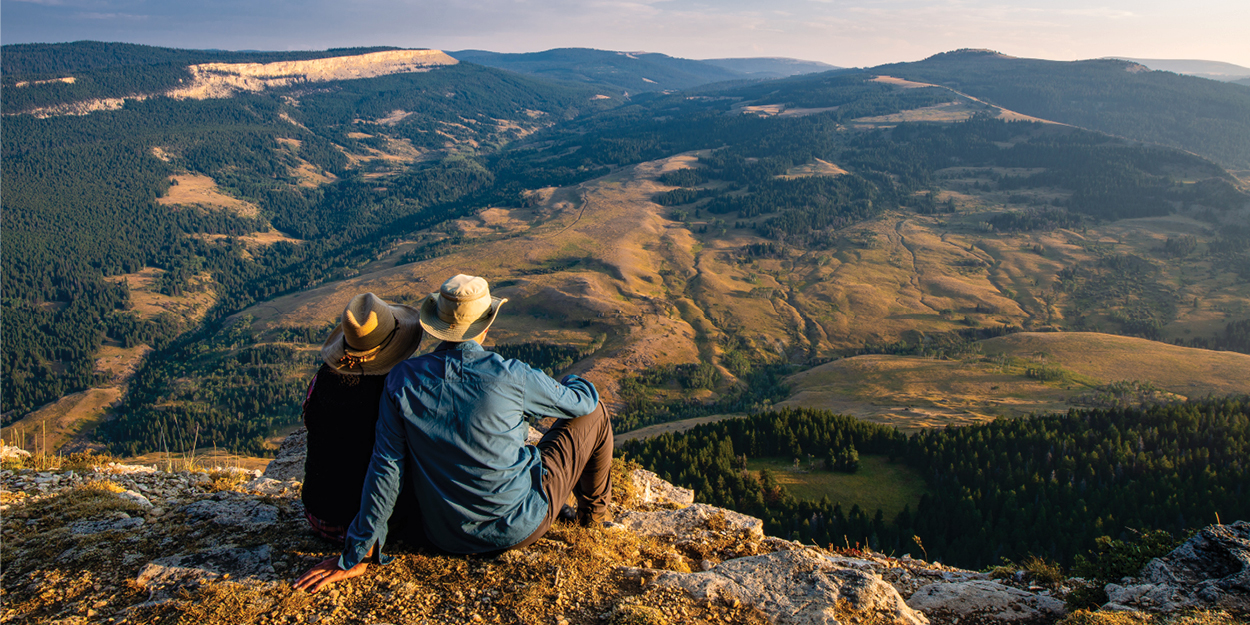 Join Michael and other photographers by submitting your own shot of Wyoming for the Outdoor Council’s 2023 Calendar Contest. You can enter your photos via Instagram or email. To submit your photo(s) via Instagram, you must have a public Instagram account so that we’re able to view your submission. Upload your photo(s) and add the hashtag #OurWyoming.

When Michael Lee told me the story behind the cover photo of last year’s calendar, he admitted that it sounded like a story that could have had an awful ending. We’re all glad it didn’t—and that, rather, it ended with a photograph that captured  a sweeping vista of the valley below and the Little Bighorn River.

Lee, a professional photographer, and his wife, who live in a suburb north of Chicago, have been visiting Wyoming for years. This particular shot was taken in 2020, although the story started four years earlier in 2016.

That year, Lee and his wife were driving around the Bighorn National Forest in the fall, just before hunting season was to begin. “As a photographer, I’m always looking for things to photograph,” he says. “We had been driving down a dirt road quite a ways. It was late in the afternoon and we were just waiting for the light to change. We had pulled over at a spot in the road where there was a view of an elk herd in the valley below. My wife was making popcorn on our propane stove.”

That’s when a big pickup truck pulled up next to them and a father and son duo stepped out. The four got to chit chatting and the father and son introduced themselves as the Buchanan’s from Casper who were scouting for wildlife because they had drawn a tag to hunt there. That’s when the father turned to them and said, “Well, if you like this view, we’ll have to show you another one you’ll like even better.”

Without a second thought, or consulting his wife, Lee said yes. As Lee climbed into the back of the Buchanan’s cab first, at the insistence of his wife, the father turned around to reassure them that “the guns were in the backseat with them.”

The four drove down the dirt road for another 10 minutes before they pulled over again, adjacent to a dense forest. The father beckoned into the woods and said, “It’s this way.”

Lee laughs, “It sounds like the plot is thickening, doesn’t it? But we walked for about 100 yards, and emerged from the trees to the very view you see on the cover of the calendar.”

The four lingered for awhile at the vista, talking and getting to know one another, before they headed back to the pickup, unscathed.

The picture on the cover was taken two years ago when the Lee’s returned to Wyoming on their annual trip, and decided to try to find the spot again, even though neither of them had marked it on a map. There is a name for the place, Lee says, but he doesn’t know it. He calls it Buchanan’s Bluff.

The experience—”Just a couple of Wyomingites offering to show us something cool”—was more proof for Lee that Wyomingites are pretty trustworthy and friendly. He’s even stayed in touch with the Buchanan’s over the years, swapping emails every once and awhile.

“I’ve got a few Wyomingites in my rolodex,” he says. “You never know when you want to stop in and have a good meal.”

The Lee’s return to Wyoming, or at least the West, every year. Lee’s been to Wyoming more than any other place, and has probably been to more places in Wyoming than in his own state, he admits. Although he loves the people that he encounters when he travels in Wyoming, he admits that Wyoming is special for its lack of people—which is a sharp contrast to his day-to-day life in Chicago.

He also loves the diversity of the Wyoming landscape. How in many parts of it appears so empty, yet those places are so rich with life and beauty. From the rugged mountains to the dry windy desert, to the warm welcoming people. Wyoming is a place that has not seen the kind of dense industrial development that he is used to in Chicago and his home state of Wisconsin.

He first fell in love with the West as a kid when his dad took him on a road trip in 1978. But he fell in love all over again, more recently, in 2001, when he took a few months off following a stint in New York City. He  visited a friend in Dallas and then continued west with a tent and a camera. “I had no idea what I was doing,” he says, as he traveled through New Mexico, Utah, Colorado, and Wyoming for two and a half months, just driving, taking pictures, being really dirty. “I loved every second of it.”

He hasn’t let go of that feeling. He and his wife even backpacked in Wyoming for their honeymoon. When I asked him why he doesn’t just live here, he said the realities of life keep him in Chicago. It is there that he has the closeness of family and a community and  more professional opportunities  as a photographer. The jobs he is able to take there are consistent, interesting, and fun. This work and life in Chicago, affords him the ability to make a special visit to Wyoming once a year and completely shut his phone off.

He doesn’t, however, shut his camera off, rather, he likes to use it as a way to give back to the places that he frequently visits and wants to support. “All of these places need all the help they can get,” he says. “And anyone who visits should, and could, do a little extra to take care of the place, like donating. But anyone can do that, and what I can do is a little different—provide photographs that organizations can use to raise awareness or get more people to open their checkbooks. That’s something these organizations don’t usually have a budget for.” He’s happy to be able to contribute to these causes in a special way. “It doesn’t cost me anything, and if my photograph can help raise awareness or convince a politician to vote a certain way or support a certain action, well, that’s just icing on the cake.”