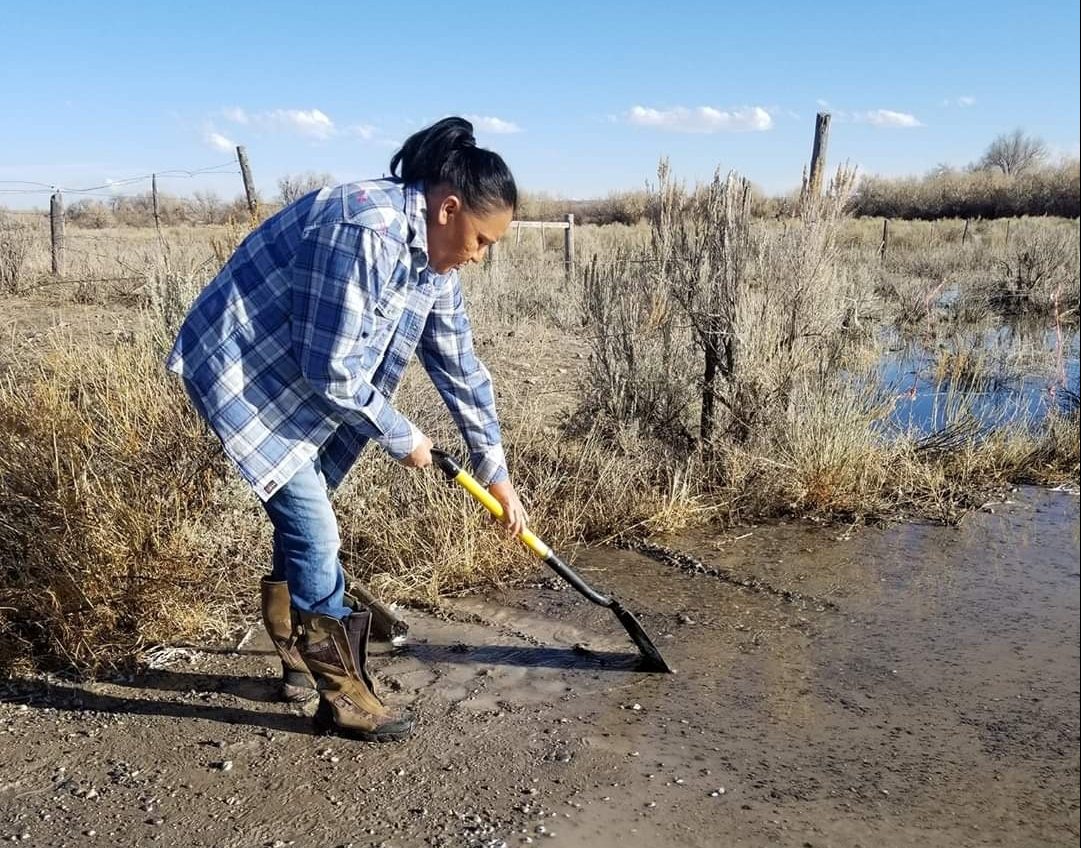 No matter how much Yufna Soldier Wolf insists she has more to learn about advocating for her community, her work already speaks for itself.

Yufna is the former director of the Northern Arapaho Tribal Historic Preservation Office, where she worked for 12 years. During her time with the office, she was responsible for repatriating the remains of three Northern Arapaho children — Little Chief, Horse, and Little Plume — to the Wind River Reservation from the site of a government boarding school in Carlisle, Pennsylvania where they died in the late 1800s. More recently she’s been doing consulting work related to environmental policy, preservation of cultural resources, and the Native American Graves Protection and Repatriation Act, as well as Arapaho history.

Yufna grew up in St. Stephens,  located just outside Riverton on the reservation, as the youngest of 10 children. She now has three kids of her own and lives in the house her father built, which is fitting given that she’s walking in his footsteps.

Mark Soldier Wolf, who passed away in 2018 at the age of 90, was Yufna’s introduction to dealing with tribal cultural resources and land management issues. Before the Northern Arapaho Tribe had an official historic preservation officer, he filled that role and a young Yufna was there to help. She quickly came up to speed on Section 106 — a portion of the National Historic Preservation Act that requires federal agencies to consider impacts on cultural sites and artifacts — and other policies.

“Him being older, he didn’t really know computers or all this other stuff, so I’d be sitting there helping him read an [environmental impact statement] or an [environmental assessment],” Yufna said. “And I was in high school.”

Yufna has degrees from Montana State University and the University of Wyoming, and is currently taking courses at UW with her eye on another diploma. At the same time, she’s transitioned from student to teacher, sharing the traditional knowledge passed down by her parents through speaking engagements and her consulting work.

And, this summer, she decided to venture down a new path of learning when she heard about FIELD Training, the Wyoming Outdoor Council’s conservation leadership program. It’s a natural fit for Yufna, whose career has been based largely around stewarding tribal lands and cultural resources — and focusing on “things that are important to me that, if I didn’t do them, probably would never have gotten done.”

Even though she has served as a Fremont County historic preservation commissioner, Yufna felt her experience in county and state government didn’t match her familiarity with the tribal and federal levels. Now, she’s expanding her comfort zone in FIELD Training, WOC’s free eight-week program designed to give engaged citizens the skills they need to be effective advocates for conservation in their communities. This year’s curriculum centers around public lands and covers the basics of Wyoming government and policymaking through the process of creating and carrying out a grassroots campaign.

For a small group project, Yufna and several other participants opted to research renewable energy development. Just like the state of Wyoming, she points out, the Northern Arapaho and Eastern Shoshone tribes rely heavily on oil and gas severance taxes for revenue and need to be prepared for a future with lower prices or less demand.

“Education, healthcare, roads, maintenance … you name it, it’s going to be impacted. So that’s why we’re going to talk about renewable energy and how it can be incorporated into land use.”

“That’s where we came from, that’s who we are. Just being able to connect to areas that are special or sacred to us is important. I think that’s why I work as hard as I do with these various entities and land issues. Land is the biggest resource we have.”

She isn’t sure where the future will take her, but she hopes to use her experiences to make sure Indigenous voices are heard at all levels of government, educate tribal members in Wyoming and elsewhere about the tribal impacts of county and state policies — like taxation and voting law — and encourage people to “help Wyoming be the best, most successful state we can be.”