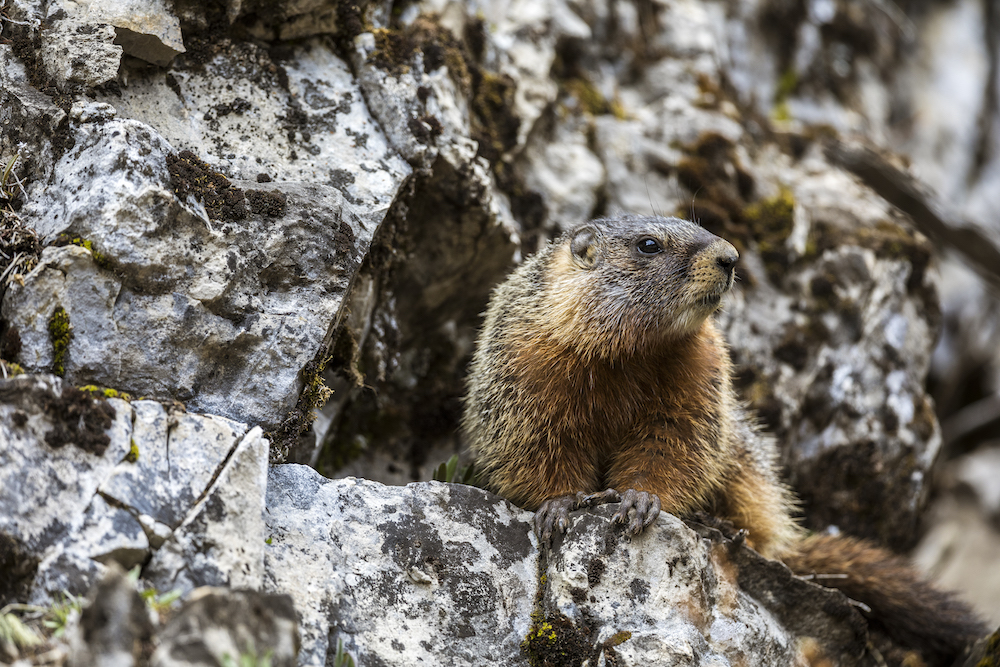 “I have a huge soft spot for animals,” Sean said as he described his childhood growing up on a ranch in Buffalo — where peacocks, rabbits, sheep, pigs, bison, and a younger Sean roamed. He said his father was instrumental in helping nurture this appreciation for the creatures that humans share the world with. As an adult, his persistent adoration for wildlife has translated into a rewarding personal photography business, Hidden Wilderness Photography, which he runs on the side while also working full-timeas a computer programmer.

Two images Sean captured — and that we chose for the Wyoming Outdoor Council’s 2020 calendar — hint, too, at Sean’s incredible patience with and ceaseless fascination for the animal world. They also point to his ability to reverse the common idiom and see a single tree in the forest, to his benefit.

Take his shot of a Lincoln’s sparrow perched amidst the textured, muted mauve of a willow thicket. It had been an early morning for Sean and his fiance as they awoke in Yellowstone National Park and set out to find the wildlife that also tends to wander about at dawn. Near Barronett’s Peak, Sean sighted two black bears on a distant hill playfully chasing each other and he set up his camera. And waited. And waited.

“I was hoping the bears would come closer, but they just continued to move in and out of the treeline. At a certain distance, you just can’t get a reasonably artistic photo. Then, because other people had started to gather after seeing my big lens, the bears eventually noticed and wandered off,” he recalls. “And I was about to pack up my camera, but decided to look around in the willows in front of me. And there, not feet from me, was this little Lincoln’s sparrow in the willows, and he looked right at me, and I pressed the shutter.”

He was surprisingly pleased with the photo of the little guy. “A happy happenstance,” he would call it. He particularly loved the cold blue feel, caused by the early sunlight and the overcast sky, of this photo we selected for February in the calendar.

A photo of a male marmot, which we included in November, was a similar story of patience and attention to detail. Sean and his fiance had again ventured off into Yellowstone behind Pebble Creek Campground at the far end of Lamar Valley — this time with their hopes set on finding a rumored fox den hidden among the granite boulder outcroppings. But instead, they came upon a colony of marmots. (Sean and his fiance, admittedly, have an affinity for rodents.) They decided to hang out and watch to see if any baby marmots would come out since they had never seen one before. The only marmot who made his presence known was a large male, though, who they assumed was tending to and protecting his brood. For minutes, they sat and watched this male dart in and out of the series of tunnels the marmots had built behind the rock. Frequently, the male would pause and stare them down, and that’s when Sean captured this shot. “There’s some personality there, for sure,” he chuckled. Sean and his fiance left soon after that, following the principles that Sean upholds when taking his photographs.

Sean started photographing his wild surroundings when he was about 14 and his family took their first trip to Yellowstone. Animals abounded, he remembers, and he was so disappointed he didn’t have his own camera to document all the creatures he saw. On the way home, his family stopped in Billings and bought him his first camera. The rest is history, with a little break in his late teens and early twenties. What sparked him to pick the camera back up again was another trip to Yellowstone and the wildlife within. Again, he returned to his then home in Portland, Oregon, and immediately purchased a new camera and a big lens.

Sean now lives in Worland and has been back in Wyoming for about four years after living “all over” in the Pacific Northwest. He decided to come back when he was “done” and wanted to reacquaint himself with the depth of the outdoors that he grew up with. “I think Wyoming is the most beautiful state in the union, and it’s accessible. And it’s appreciated. And it’s not overpopulated.”

Beyond his photography, he does what he can to support conservation efforts in the state, too, donating to nonprofits like Yellowstone Forever. He said it’s really important for him to see the state’s public lands remain public and accessible, and not become carved up by private interests. And he hopes his wildlife photography does a little of that work, too, showing people that this isn’t just a human world but that there’s much more out there. That there are animals, too, who depend upon the land.

“I hope my photos help cultivate a sense of respect and the idea that this is something we need to protect,” he said.

Join Sean and other photographers by submitting your own shot of Wyoming for the Outdoor Council’s 2021 Calendar Contest. You can enter your photos via Instagram or email. To submit your photo(s) via Instagram, you must have a public Instagram account so that we’re able to view your submission. Upload your photo(s) and add the hashtag #OurWyoming.