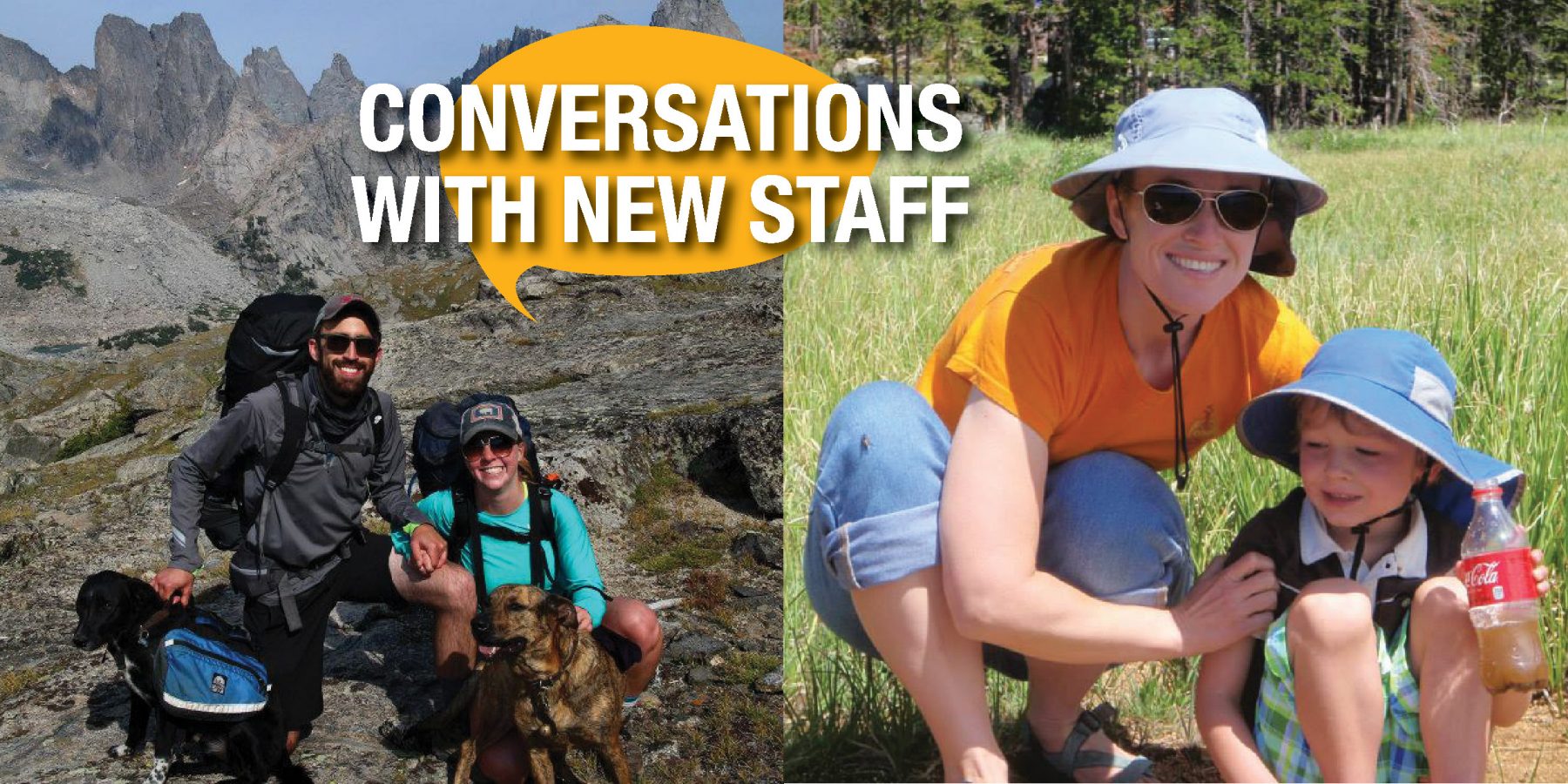 As we start a new year and a new decade, the Wyoming Outdoor Council is even more committed to building relationships — with members, partners, decision makers, and the general public alike — led in part by Kristen Brown, who was promoted to associate director in November, and Alan Rogers, our new communications director who joined the staff on the first of the year.

Kristen joined the Outdoor Council at the end of 2018 as the membership director after working at NOLS for 11 years. Kristen has a successful history of administrative work for small businesses and nonprofits, and is excited to apply these skills to protect the landscapes she loves. As associate director, Kristen will continue her work to grow WOC’s member base and strengthen the internal operations of the organization.

Alan comes to the team following a 15-year career in journalism, including eight years as an editor at the Casper Star-Tribune. A love of wilderness and the desire to make enjoying the outdoors a full-time pursuit brought him to Wyoming, and the drive to take an active role in safeguarding those places landed him at the Outdoor Council. As communications director he’ll juggle a variety of tasks, but it all comes down to keeping our members and the public informed and empowered to make their voices heard.

As Kristen and Alan continue to get settled into their new roles, we pulled them aside to talk about their road to the Outdoor Council and what they have planned for the year to come.

What do you love about the outdoors?

ALAN: First off, when I was growing up, being outside was priority No. 1. My dad had been a backpacker and climber during his bachelor days, and my mom grew up being hauled across the country on summer-long camping trips. So outdoor recreation was just the default activity when my brothers and I came along. We camped, hiked, and fished but some of my best times were during elementary school, when I could spend my entire summer vacation catching minnows, frogs, and turtles in our pond with a battle-worn butterfly net.

KRISTEN: My family didn’t spend a lot of time outside, but every summer we would travel a few hours north to a lake for camping and boating. It was a great escape from city life and introduced me to wildlife (bears, deer, and so many birds) that we didn’t have in my hometown. I loved fishing, swimming, and riding in the boat. The roar of the motor drowned out all other sounds, but I loved the opportunity to be alone with my thoughts.

Since those childhood camping trips, I’ve grown to love spending time outdoors. My first ever backpacking trip was in the Anza Borrego Desert State Park in southern California. While a short trip, it amazed me to be so far out of sight and sound of other people. I’ve come to cherish those moments and rely on even the memories of solitude to bring peace to my life. In addition to hiking and backpacking, I enjoy long distance cycling, birding, and learning new skills like cross-country skiing.

ALAN: As an adult, getting outdoors is still my way of recharging mentally. Spending a decade and a half in daily journalism meant that I was constantly connected to technology and being bombarded by negativity. When you’re hiking up a mountain or listening to the swish of your skis that all disappears.

KRISTEN: One favorite memory I have is on a backpacking trip with a friend in Kings Canyon National Park in California. I had found a lovely hillside to watch the sunset over the mountain. Downhill from me was a large boulder with a u-shaped slot in it’s top. Not long before the sun went down a yellow-bellied marmot hopped right up onto the boulder and nestled itself on its side right in that slot as if it was a nightly ritual. It looked over its shoulder at me and I like to think it was encouraging me to enjoy the sunset right along with it.

ALAN: It’s hard to choose one in particular, but a few memories stand out. About twenty years ago I did my first extended backpacking trip, which was a week on Isle Royale National Park in the middle of Lake Superior. It was my first experience in a wilderness area and the first time I ever felt completely removed from civilization. I realized I could be self-sufficient.

Around that same time I became infatuated with the Wind River Range. It seemed like the most beautiful and remote place I could imagine. When I moved to Wyoming years later I finally got up into the Winds for the first time. I’ll never forget that. Not long after, I asked my wife to marry me in the Cirque of the Towers. Luckily she said yes … it would have been a long walk home otherwise.

KRISTEN: My son, Rowan, was born not long after we moved to Lander so my favorite memories of Wyoming revolve around exploring with family. When he was little, it was amazing to be able to take a short car ride, pack him in a baby pack, and be hiking up the Falls Trail in Sinks Canyon in no time. Now that he’s older, I’m looking forward to exploring the Winds on longer trips together.

What drew you to conservation work, and to WOC in particular?

KRISTEN: From a young age I felt a strong connection with wildlife. I poured over my Ranger Rick magazines in my room and in 1987 when the California Condors were being removed from the wild I joined my first conservation organization to support their recovery. I mourned the listing of the Przewalski’s horse and even drafted a letter to President Reagan to make sure he knew it was an issue. So, I guess it’s really no surprise that I ended up studying ecology in college and interned at a local environmental nonprofit.

ALAN: The main reason I took this step is because I came to realize that enjoying the outdoors and being a cheerleader for conservation wasn’t enough. I always considered myself a conservationist because I valued our wild places and natural resources, and wanted them to be treated with care so they could remain forever. But what difference was I making? Not much.

KRISTEN: My partner, Eric, and I became members of the Outdoor Council soon after moving to Lander. It was really no question for us, even though we both were making small nonprofit salaries at the time. We knew that WOC was doing the work that would protect wildlife, public lands, and our clean air and water. Being a member of WOC’s community was an important and rewarding way that we could play a part in conservation in Wyoming.

ALAN: We’re incredibly blessed to live in a country with such a wealth of public land, which we can all enjoy for free. The trade off is that an increasing number of people who recreate in the outdoors does not necessarily translate into more funds for land and wildlife management. And a conversation among friends about clean air and water is not going to influence industry or policymakers. Everyone needs to speak up, and this is my way of doing that.

There are a good number of conservation groups working in Wyoming right now, and it’s been encouraging to find a real sense of community among them. What I respect most about the Outdoor Council is the focus on results. The staff take real pride in serving as a resource to help other groups and individuals make a difference. And the overriding culture at WOC is that we can best protect Wyoming’s environment and quality of life by bringing people together to find solutions. Conservation issues can be polarizing, but reasonable people can find common ground. In a place as small as Wyoming that’s very important.

KRISTEN: When an opportunity opened for me to work at the Outdoor Council, I was excited to play a larger role in the WOC community. Early on, it became clear that the staff at WOC is stellar. There are so many committed individuals working together to move our goals forward; it’s really inspiring. Now that I’ve been at WOC for a little over a year, I understand so much more about what goes into meeting our goals. Whether it’s reading legal documents, talking to legislators about upcoming bills, making sure our members and the public know what’s happening around the state, or taking care of the many logistics needed to keep everything running behind the scenes, everyone has an important role to play.

What do you want to accomplish in the coming year?

KRISTEN: I’m looking forward to playing more of a leadership role at the Outdoor Council. As we continue to grow our team, I hope to provide a base of support for employees so we continue to work well together and do good work for conservation in Wyoming.

ALAN: I’m transitioning to a completely new field, so I have my work cut out for me. Right now I’m focused on getting up to speed on our advocacy programs, as well as the nuts and bolts of the print and online publications I’ll be responsible for. I have a background in social media management and would like to leverage that to help build more awareness of the Outdoor Council’s work and foster public discussion about the issues. And our advocacy staff does some impressive work outside the public eye. I’d like to help share it with more folks around the state.

Why are you excited about the future of conservation in Wyoming?

ALAN: Wyoming is unique in that so many people are tied to the landscape in one way or another. And, for the most part, there’s an understanding that what we have here is special. People might have different opinions on how much loss of wildlife habitat is acceptable, or what level of methane emissions can be justified by the economic benefit of an oil and gas project, but at least we’re speaking the same language.

KRISTEN: We are heading into uncertain times. I don’t know what the future will hold for conservation in Wyoming. We are facing the impacts of climate change at the same time as we are seeing coal companies closing in Wyoming and throughout the country. I think Wyoming has an opportunity to lead the country in the way that we handle our transition away from a carbon-based economy. As a state with a smaller population, I think we can be more nimble, innovative, and forward-thinking. While I don’t know what the answers will be, I am excited to be part of the conversation.

ALAN: I work for a conservation group, but my kids will attend great schools funded by coal royalties. Guys working in the oilfield are probably some of the biggest contributors to science-based wildlife management in the form of hunting and fishing license fees. Our interests are intertwined more than most people realize and there’s so much potential to work together.