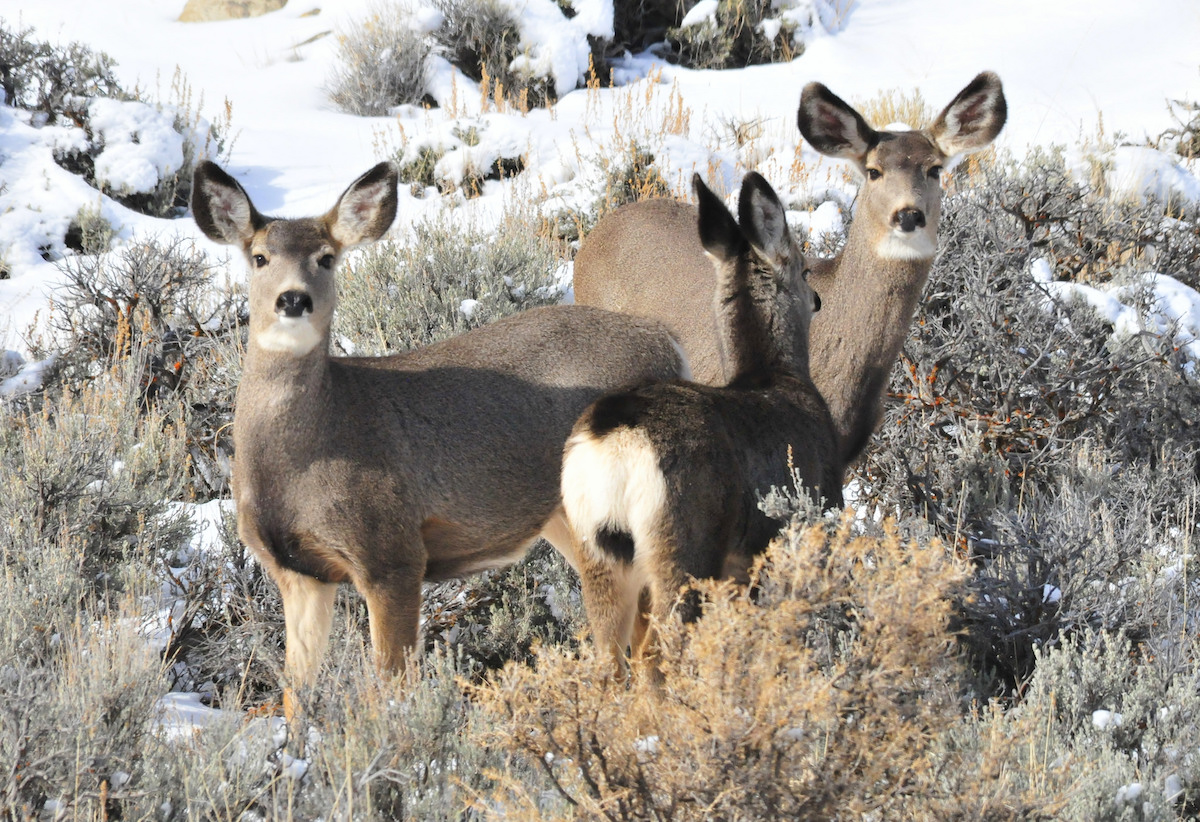 The U.S. Bureau of Land Management’s reckless oil and gas leasing actions may be the death warrant for a prized mule deer herd that relies on the renowned 150-mile Red Desert to Hoback migration corridor in western Wyoming — the longest big game migration measured in North America.

Wyoming’s political leaders and wildlife officials can avert this crisis, but there is little time left to take action. The next lease sale is Sept. 18.

“That we still have some of the most intact big game corridors in the world is a rarity worth protecting,” Wyoming Outdoor Council Executive Director Lisa McGee said. “It’s time for Wyoming to stand up for our wildlife.”

Write the Governor
Write the Commission

Oil and gas development takes priority over all other uses and values for public lands under President Trump’s energy dominance mandate — drawing a target on Wyoming where much of the surface and underground mineral estate is owned by all Americans and managed by the federal government.

In a rush to implement the mandate and limit options for the public to have a say in future land management, the BLM has tripled the size of its quarterly oil and gas lease sales across the West. More than 1 million federal mineral acres across Wyoming are up for grabs in the Third- and Fourth Quarter oil and gas lease sales. Just a small fraction of those acres overlap the migration corridor and threaten its functionality.

The Outdoor Council and other organizations have asked the BLM to defer these leases, along with others in crucial wintering habitat statewide — a necessary action that does not impede an industry that already has filed 10,000 applications to drill across the state.

So far, the Wyoming Game and Fish Department seems satisfied with the BLM’s claim that “lease notices” attached to these parcels will “mitigate” impacts. But this assertion is incorrect.

Unlike formal lease stipulations, which are legally enforceable modifications to the terms and conditions of a standard BLM oil and gas lease, the notices proposed by BLM provide no authority to halt or significantly modify operations if necessary to protect migrating wildlife. State officials recently appeared to affirm this reality when the Wyoming Office of State Lands and Investments insisted that legally enforceable “lease stipulations” must be in place before offering oil and gas leases on state lands in the corridor. Such science-based stipulations should apply to federal leasing in the same corridor as well. Wyoming’s national preeminence in mule deer migration research positions us with the best expertise to craft these important stipulations.

So far, the BLM has been deaf to these arguments, as well as objections from Wyoming residents who value healthy wildlife populations, and the American people who own these public lands. However, the BLM has shown that it is willing to listen to two voices of influence: Wyoming Gov. Matt Mead and the Wyoming Game and Fish Department.

At the governor’s request earlier this summer, the BLM agreed to withdraw three oil and gas lease parcels from the migration corridor, as well as sensitive habitats in the Greater Little Mountain Area where the state and feds previously had agreed to hold off from leasing.

Both Sweetwater and Teton counties, home to the southern and northern ends of the Red Desert to Hoback migration corridor, have asked the BLM to defer all leasing in the corridor for the irreversible damage it would do to wildlife and the local outdoor recreation and tourism economy. They need Gov. Mead and the Wyoming Game and Fish Department to reinforce and carry their message. Respecting local governments is a mantra of this administration, yet it now rings hollow. The BLM has ignored these counties altogether.

Dan Heilig, the Outdoor Council’s senior conservation advocate, wrote to Wyoming Game and Fish Director Scott Talbott urging him to take action and to use the agency’s influence to insist that the BLM defer Third- and Fourth Quarter leases for sale in the corridor.

“Our big game herds are world-renowned and contribute to our collective sense of pride and quality of life we share in Wyoming,” Heilig wrote in the August 21 letter. “Surely the state can and should advise against sales that risk the future of our mule deer population.”

For more information, read our fact sheet about the issue and how you can effectively advocate for protecting big game migrations in Wyoming. Also, read the Outdoor Council’s August letter to Wyoming Game and Fish Department Director Scott Talbott, urging the agency to stand up to federal overreach to protect Wyoming’s migrating wildlife.