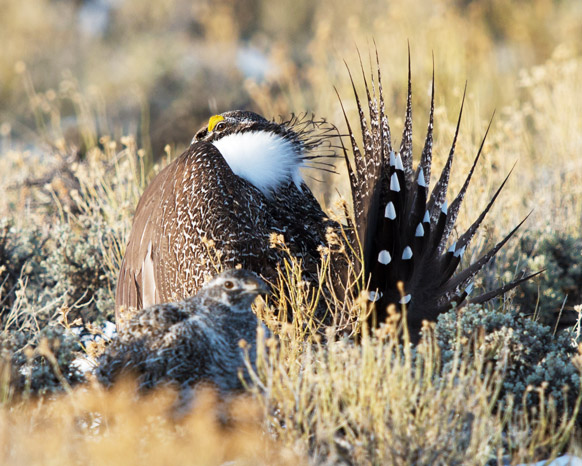 A bill we’ve been monitoring in the Wyoming State Legislature—HB 271: game bird farms – greater sage-grouse—went bad last week and we need your help to stop it.

Please contact your Senator and tell them to oppose this bill. We expect this bill to be up on the floor of the Senate, so please do this soon. Check out our fact sheet for more details about this complex issue.

The original bill wasn’t so bad. It attempted to set up a licensing structure with tight controls for commercial sage-grouse farms. When it first went through the House, the bill was strengthened to assure that the Game and Fish Department could control the scope of these operations, and especially how and where sage-grouse eggs would be collected from the wild for the start of brood stock.

The bill originally set an annual limit of 250 sage-grouse eggs that could be collected by licensees.  Game and Fish officials testified that this was the biologically defensible limit that past analysis had shown was acceptable, without compromising the fate of this precarious species.

The Senate committee, however, stepped over the line and upped that amount to 1,000 sage-grouse eggs that may be collected annually by any licensee.

In the Senate committee it appeared that some Senators wanted to help an interested company get up to full-scale operation sooner. This company wants to try to farm-raise and release sage-grouse. Commercial business should not be prioritized over wildlife science.

Even the sponsors of the bill and the prospective company admit that no one knows if this is a viable commercial operation. There has never been any successful large-scale captive breeding and release of sage-grouse back into the wild. Also, simply raising more birds and releasing them will not address the real conservation needs for this species. The sage-grouse has a habitat problem, first and foremost.

The fate of Wyoming’s sage-grouse shouldn’t be jeopardized by an uncertain and, frankly, risky business. Thanks for your help as always.