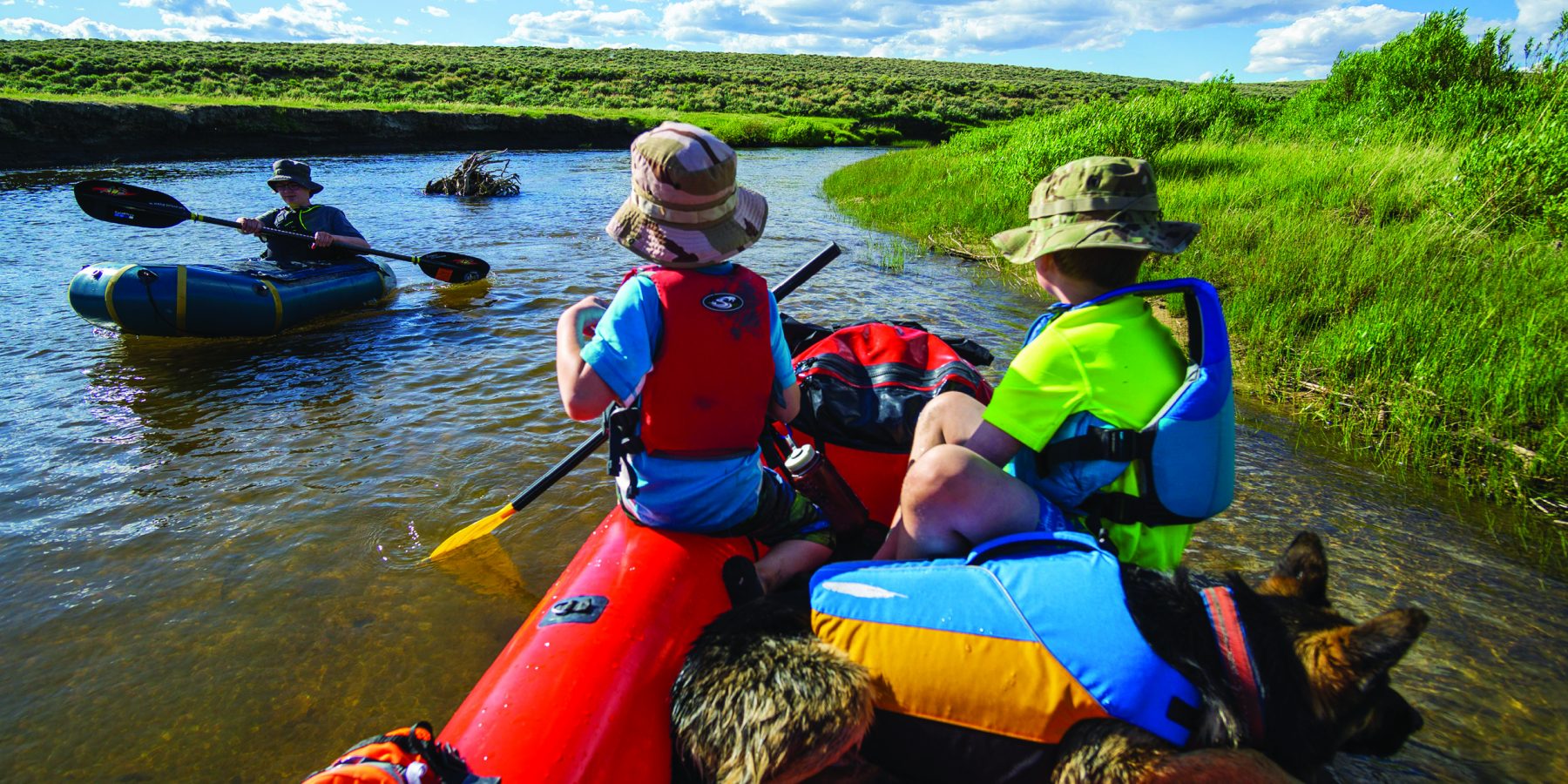 Join Brandon and other photographers by submitting your own shot of Wyoming for the Outdoor Council’s 2022 Calendar Contest. You can enter your photos via Instagram or email. To submit your photo(s) via Instagram, you must have a public Instagram account so that we’re able to view your submission. Upload your photo(s) and add the hashtag #OurWyoming.

In the 2021 Wyoming Outdoor Council calendar, Brandon Ward’s three sons and their dog make two appearances within the pages: once perched at the smoky summit of Continental Peak, and later aboard pack rafts on the Sweetwater River. If anyone follows Brandon on Instagram (@wyoutside), you’ll see more appearances of his sons, Henry, Tucker, and Sawyer, and their dog, Shep. Brandon, of course, is there behind the lens.

True to his username, there is only one picture of recent, or within reasonable scrolling distance, on his page that’s taken inside. And his images look rugged, but only because Wyoming is rugged — there are wide sweeping vistas of undulating striated badlands, and clouds forming unique bulges and deep pockets in the dense blue sky. There are steep canyons, and gushing rivers, and granite mountain summits, sure, but there are also his boys, down low and up close, exploring and discovering nature. A reminder that there’s plenty of easy, accessible, kid-sized adventures to be had in this state, too.

In August, Brandon’s wife Karly goes back to work as a principal in Riverton, earlier than their sons return to school in Lander where the Wards live. Which leaves Brandon as the sole parent during the day for the rest of the month. It’s those few weeks where Brandon gets to spend quality time with his growing boys, which always, always involves the outdoors.

“We get after it pretty hard, me and the boys,” he said with a laugh. “And while it would be really fun to stomp up into the Winds, it’s really equipment heavy.” And so he often takes them out into the Northern Red Desert, a quick drive from Lander, because the recreation out there is easier. “You can have an epic day hike, come back to your car for some car camping, and still see a lot of country.” The photo of his kids up on Continental Peak is something they do together once or twice a year because it’s a hike with “no bugs, no heavy packs, kid-friendly.”

Personally, Brandon likes the Red Desert for numerous other reasons, too. With a big honest grin, he told me that he doesn’t “like a lot of people around.” It’s the reason he moved to Wyoming in the first place after growing up in rural South Carolina and living in places like Georgia, Tennessee, and Colorado. “I’ve lived in big cities. I value low populations. There’s something to me about the lack of people. Even in the Red Desert, although it’s checkerboard with private and public lands, you can still generally pick a cardinal direction and go that way.”

When he takes his kids out, he tries to teach them to appreciate that fact.

“I think all kids in Wyoming sometimes are oblivious to the fact of how good they have it, if their interest is in outdoor recreation and public lands. Everything else in other states seems to be permit- or reservation-based or costs money to see. We have none of that here. Things are the way they are, unaltered by man. And that’s pretty precious and these places are becoming less and less. So I try to tell them to just appreciate it, because who knows what it will look like in 20 years.”

Brandon also has an affinity for the rivers in Wyoming, so another annual Ward family trip includes floating down the Sweetwater. It’s an adventure Brandon has gone on by himself, with friends, and with his family over 20 times, he estimates. Locally, he’s come to be known as the “Sweetwater Whisperer” for the knowledge he’s built over the years.

“I’ve been a river boater in one way or another my whole life,” he said. “From my earliest outings on rivers with my father in my home state to now passing that passion on to my kids here locally on the rivers in my backyard. I hope that they find the joy I have out there on this special river.”

He described the Sweetwater as mostly a gentle gradient, with grass- and willow-lined banks, and never-ending meanders that makes it great for a family adventure. His boys learned to paddle there. And its remoteness contributes to how special he finds it: “It feels like we are completely alone out there and exploring it for the first time.”

He’s been saddened by its degradation and continued levels of pollution, however. And over the years, he’s felt that he’s become more and more conservation-minded in proportion to the time he spends outdoors.

“It’s hard not to care about these places when you’re within them so much. I’ve come to the realization that I’ve only ever been a recreationalist. I rationalize it as I’ve been a taker, not a giver, and for a rash of reasons this suddenly doesn’t sit well with me. My passion for the outdoors has taken me to many wonderful places and helped mold me into the person I am today. Many of those places are in danger from various threats, including the good-intentioned recreationalist.”

As he’s gotten older and more mature, he’s shifted his focus beyond recreation and has tried to learn about the environment he’s in as well as the current threats to that environment, even if that means grappling with his own impact as a recreationist. He began asking himself, “What can I do to lessen or remove my impacts?” and he’s found interest in sharing what he’s learned, especially with his kids and also as a photographer.

“I like to think that sharing these scenes that I photograph helps people to appreciate wild places they may have never heard of or will never get to go to or do it in the way I often do,” he said. “We are spoiled here in Wyoming with our scenery and remoteness. As a photographer, it’s hard to beat. Around every corner is a place worth appreciating and sharing.”