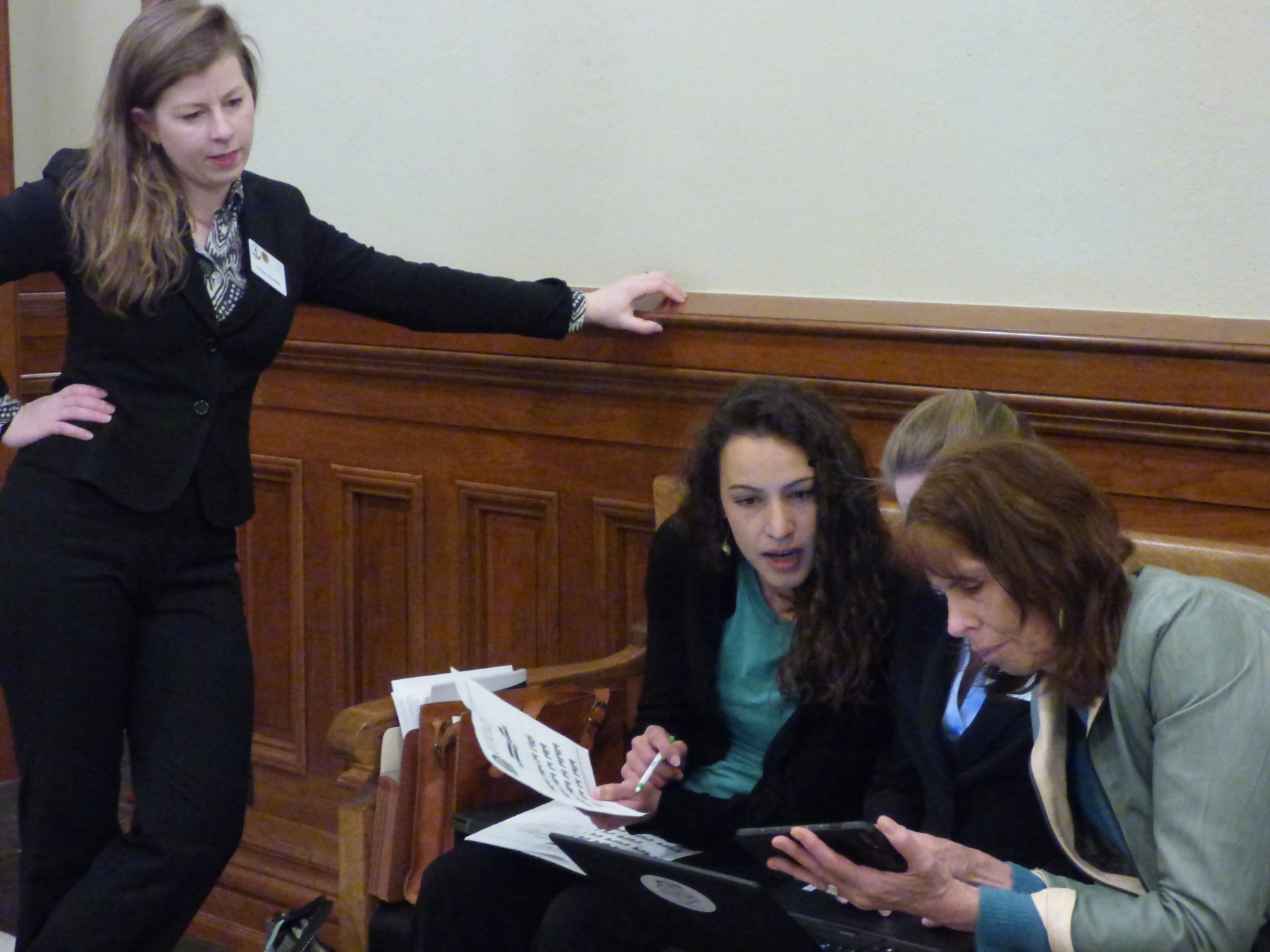 It all started on a Sunday at the Equality State Policy Center’s SHAPE training, a program aimed at empowering citizens to engage with Wyoming politics. It offers ideas, skills, strategies, and tactics for advocating, not just at the Wyoming State Legislature, but anywhere. This material proved useful, as I was scheduled to begin my work with Wyoming Outdoor Council folks, including Steff Kessler, Kristen Gunther, and Mike Kusiek, the next day.

I stayed in Cheyenne at the WOC house, which gave me the ability to focus completely on the experience and work without the worry of commuting. Staying together also gave us time to debrief in the evening and strategize in the morning. Hearing how these veterans thought about and processed their day gave me a great deal of insight into how to organize my own experience and to interpret what I was seeing and hearing. While I was focusing on different bills any given day, in many ways each day had a similar rhythm. There were often committee meetings before the House or Senate began, so that was the time to testify, if it was appropriate, as well as listen to the front line deliberation.

I greatly appreciated when Steff or Kristen clarified background information about a representative or an issue that was not clear from the first hearing. Much of the rest of my days were spent listening to the House or Senate debates while attempting to draw out a lawmaker in order to offer them a bit more information or perspective on an upcoming vote. Sometimes there were evening committee meetings or informal gatherings where I met legislators and offered warm words or thank yous. I had the opportunity to meet my House representative at one such dinner, something that surely would not have happened otherwise. I also felt confident enough to walk up to my senator and introduce myself since I had a context in which to engage him.

I was amazed by the array of bills addressed during a session, and gained an appreciation for the effort that our legislators voluntarily put in for weeks. I also gained a great deal of respect for the work that lobbyists and advocates do for the legislators. Legislators do not have staff and often can read about the upcoming bills only shortly before a vote. Having well-informed advocates to do some of the research for the legislator is actually important; and thus, gaining a good reputation and rapport is crucial for good relationships with legislators.

On Wednesday of my internship week, I did not have any particular task in front of me and decided to see what the Senate Minerals committee was reviewing. There were two bills, HB 4, Wyoming coal marketing program, and HB 3, Wyoming energy authority – amendments. HB 4 proposed that a program be established to market Wyoming’s coal and address some of the monetary impacts faced by communities as the coal market changes. It was a modest amount of money, and, as such, seemed like not much of a help — for either idea. I had not spoken in a committee meeting before and was a bit nervous. However, the chair, Sen. Anderson, was gracious and humorous as I made a comment about the small amount of money for something like international marketing and perhaps it would be best to simply focus on assisting impacted communities.  The bill passed committee with only the chair against.

Emboldened by my “success” at my first attempt to speak, I also decided to speak up on HB 3 — a bill meant to clarify some language and authority about public utilities, including creating a “Wyoming energy authority” board. I was curious as to the description of the board members. It stated that of the seven members, two had to be knowledgeable in the field of energy but an additional two had to be specifically knowledgeable of oil and gas issues. It struck me that that amendment stacked the board towards oil and gas, so I asked that specific question. Sen. Anderson suggested that, yes, the oil and gas folks were concerned that they would not be represented. However, my question was taken up by Sen. Rothfuss who said he had the same question and pursued the conversation further. Again, the bill passed the committee as written.

However, two things happened after the committee adjourned that were quite satisfying, especially as this was the first time I had spoken in a committee hearing. Sen. Anderson stopped to say thank you and that he had agreed with me that HB 4 seemed like “too little, too late,” which was why he voted against it. Then Sen. Rothfuss also stopped to thank me for my question as it was obvious he had similar concerns. Speaking in the committee was a great experience as Sen. Anderson was so supportive, and it was also really wonderful to have the senators make a point of thanking me for my input. I am now ready to tackle my next committee meeting knowing I will be heard and perhaps can even start a conversation among the committee members.

It was a pure delight to be in the Capitol building. It is a beautiful structure with frescoes, floor tile designs, lovely wooden balconies, and high windows  I took some time to wander around, in and out of some offices, so I could see more of the building. I ran into a longtime employee who gave me an unofficial tour of all the small and large rooms with painted vault doors; we both wondered what would have been in each. Even the tunnel with the committee meeting rooms was nicely done with lots of natural light from the skylights. Coming to the Capitol in the early morning as the sun was just hitting the building was lovely, and I had to take photos of the edifice in the sun.

In the end, I am grateful for the opportunity to have participated in the Outdoor Council’s legislative internship program. I learned a great deal about the Wyoming Legislature, the role and importance of advocacy, and some about myself as well. I am much more likely to engage civically in the future and have a better idea of how to actually be useful in that role.

Elizabeth Traver is a lab manager in the University of Wyoming’s Center for Environmental Hydrology and Geophysics, as well as a doctoral student in soil science. She was one of the Outdoor Council’s five citizen interns during the Wyoming Legislature’s 2020 budget session.