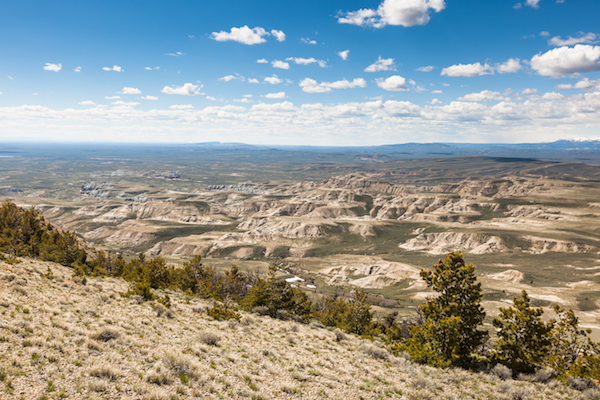 For the past nine years, the BLM has been revising its long-term “resource management plan” for more than 3.5 million acres of public lands in southwest Wyoming — including the Red Desert. Once finalized, this plan will dictate which lands are available for oil and gas leasing — and which will be protected because of their wildlife, cultural, scientific, recreational, or other values. And for nine years, the Wyoming Outdoor Council has been advocating strong protections that will safeguard invaluable resources like our big game migration corridors, historic trails, archaeological and scientific resources, and Native American sacred sites. But if similar plans around the West released under this administration’s “energy dominance” policy are any indication, we can expect the upcoming Rock Springs plan both to remove current protections and open even more lands to development.

Wyomingites walk the talk when it comes to strong ties to the land and natural resources. We recreate outdoors at far above the national average — hunting, fishing, camping, climbing, skiing, you name it — and the vast majority of us support conserving the landscapes we love and the wildlife that rely on them. We recognize that responsible industrial development on our public lands can benefit our communities, but only if it is done right, in places that don’t sacrifice Wyoming’s natural beauty, open spaces, and abundant wildlife. We might choose to develop our resources carefully, but we all tend to agree: our outdoor heritage is not for sale.

Today, the federal government is not respecting the balance Wyomingites have long fought for. Most of the 30 million acres of public lands in Wyoming are managed for “multiple use,” a congressional mandate to balance a wide variety of resources and values — from hunting and fishing, outdoor recreation, and conserving wildlife habitat to livestock grazing, and industrial uses like mining and oil and gas development. In the Federal Land Policy and Management Act, Congress instructs the BLM to manage public lands to

protect the quality of the scientific, scenic, historical, ecological, environmental, air and atmospheric, water resource, and archaeological values … preserve and protect certain public lands in their natural condition … provide food and habitat for fish and wildlife and domestic animals; and … provide for outdoor recreation and human occupancy and use.

This congressional act also directs the agency to prioritize designating and protecting “areas of critical environmental concern” — places with extraordinary historic, scenic, cultural, and wildlife values. In the Rock Springs Field Office, this designation protects some of our most treasured public resources including the Steamboat Mountain desert elk herd, Historic South Pass, the Killpecker Sand Dunes, and the Oregon and Mormon national historic trails.

Today, the federal government is not managing for multiple use or prioritizing our most treasured landscapes. That’s bad for Wyoming. Across the West, the BLM is leasing millions of acres of public lands for oil and gas development in places with low oil and gas potential potential, while risking other values, such as wildlife and recreation.

Since 2018, the federal government has leased about 2 million acres of public land in Wyoming — an area the size of Yellowstone National Park — to oil and gas. Much of this leasing has occurred in sensitive wildlife habitat. In fact, in the past two years, the BLM has leased about 55,000 acres within Wyoming’s prized mule deer migration corridors, while roughly half of all leases since 2018 have been in core greater sage grouse habitat, undermining the collaborative West-wide effort that has so far prevented an Endangered Species Act listing for the bird.

The BLM’s forthcoming Rock Springs plan will reassess which lands are available for oil and gas development — including those currently designated as “areas of critical environmental concern” due to their outstanding wildlife, historic, or scenic values. Our hope is that these special places will retain these strong protections, but what we’re seeing in other plans across the West doesn’t bode well for Wyoming: the BLM has consistently removed  “areas of critical environmental concern” designations, ignored public demand for conservation and access, and opened up sensitive wildlife habitat to industrial development.

But here’s the thing. Despite its “multiple use” mandate, 90 percent of BLM lands nationwide are already available for development. These recent land-use plan revisions put even more public lands on the auction block every quarter, in the very places that need the most protection.

It’s disheartening to see the BLM locking up our public lands for one industry’s use and jeopardizing our wildlife for dirt cheap. Under this administration, we’re seeing rampant speculative leasing in Wyoming, with oil and gas companies leasing many parcels for the minimum bid of $2 an acre. For the price of a cup of coffee, companies have purchased the right to develop within the longest recorded mule deer migration corridor and in the Golden Triangle, some of the world’s best sage grouse habitat. To add insult to injury, many of these parcels aren’t even bid on, and are sold after auction for as little as $1.50 an acre. And almost half of the leases in Wyoming are sitting idle — tying up our public lands without producing a drop of oil and gas.

This is a serious policy failure. The “energy dominance” mandate coming from today’s White House, which prioritizes a single use of our public lands over all others, is a top-down policy that doesn’t respect local priorities or multiple use. It locks up lands for potential industrial development even when there is low oil and gas potential potential — and risks the very resources that make Wyoming special.

We’ll need your help to Protect the Red Desert

The BLM’s widely anticipated Rock Springs resource management plan, which will direct the management of more than 3.5 million acres in Southwest Wyoming, including the Northern Red Desert, could open up even more public lands to development when it’s released in early 2020. If past is prologue, this new plan will remove key protections that Wyomingites have worked for for generations, and make more land available for oil and gas leasing. That’s shortsighted, and it’s not good for Wyoming’s future.

Please stay tuned in the coming months to learn how you can weigh in and help us advocate for a plan that respects balance and protects our most important resources.