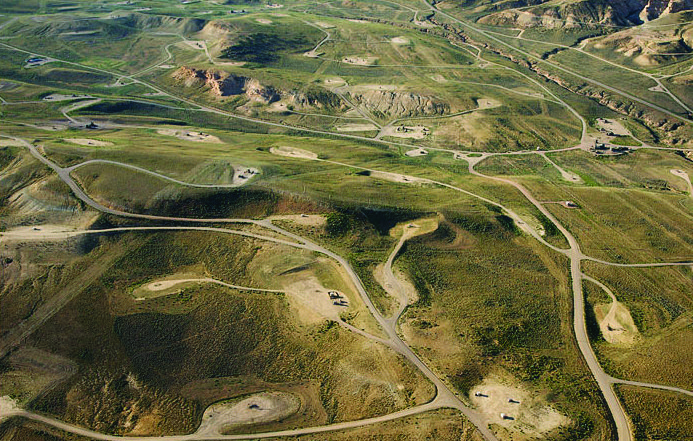 Fragmented land in the LaBarge, Wyoming Gas Field. The network of roads and gas pads have rendered the land useless for anything but industrialized gas production. Image: David Showalter.

A new “energy dominance” policy has made Wyoming ground zero for the Trump administration’s anti-regulatory, top-down mandate to promote energy extraction over all other uses on our public lands. And it’s affecting every aspect of the Wyoming Outdoor Council’s work.

Nearly half of Wyoming’s surface acreage is public land (Bureau of Land Management, national forests and parks) and the feds own and manage minerals underlying millions of additional acres of private land. During past administrations, the federal government has often served as a check on the oil and gas and mining industries’ wishes to forego a necessary balance of multiple uses. Now, the industry’s wish list is the federal mandate — and a strategy of systematically shutting the public out of decisions affecting our public lands is the new normal.

“Well established democratic processes — such as the ability to comment on proposed federal actions — are viewed by the Trump administration as impediments. This policy of ‘energy dominance’ seeks to remove those impediments,” Outdoor Council Senior Conservation Advocate Dan Heilig said. “These are our public lands, and we’re being shut out — project by project and policy by policy.”

Consider a few of the actions the administration has taken in the last year and a half that stem directly from an energy dominance policy:

• Issued an executive order in March 2017 calling for a review of all federal actions that could hinder the exploitation of energy resources and infrastructure, and immediately revoking many Obama-era measures to curb greenhouse gas emissions and protect against climate change.

• Removed regulations designed to improve the safety of hydraulic fracturing, as well as regulations seeking to reduce emissions and leaks of methane, a powerful greenhouse gas.

• Scaled back science-based protections in West-wide Greater sage-grouse conservation plans that protect habitat for some 350 wildlife and plant species.

Fighting to Keep the Public in Public Lands

Among the hallmarks of the National Environmental Policy Act — our country’s bedrock environmental law — are its requirements for federal agencies to notify and respond to the public about actions affecting the air we breathe, the water we depend on, and the landscapes and wildlife that define our quality of life. These requirements are fundamental to ensuring that the public has a say in what happens to our shared resources.

Since January 2017, however, we’ve seen federal agencies give shorter notice for oil and gas lease sales and shorten the length of time the public can comment on actions related to energy development and the management of our public lands.

Conservation organizations and citizens alike have also found it more difficult to ensure that our comments are even being considered. This year the BLM reported it couldn’t account for tens of thousands of missing public comments submitted in response to the Trump administration’s revised sage-grouse management plan.

Even federal employees who live in Wyoming confide their frustration that the democratic institutions that have long ensured public participation in federal policies are now being whittled away. These civil servants say they are relying on the public’s persistence and continued engagement.

Add to this Rep. Liz Cheney’s tellingly titled “Removing Barriers to Energy Independence Act” (HR 6087) to slap exorbitant fees on citizens who wish to protest oil and gas lease sales, and Sen. John Barrasso’s ONSHORE Act (S 2319) that would give authority to states to approve applications to drill on federal public lands, and it’s clear there’s a concerted effort to aid energy companies and remove the public from public lands management processes.

“We’re seeing policies coming out of Washington, D.C., to benefit the oil and gas industry,” Heilig said. “And their primary strategy? Putting up barriers to meaningful public input in agency decision making.”

Today, the BLM is ignoring past agreements with the state and offering lease parcels throughout southwestern Wyoming — including many inside critical wildlife habitats in the Greater Little Mountain area, in sage-grouse core areas, and in parts of the Northern Red Desert that have long been understood to be off limits to oil and gas development.

Even Interior Sec. Ryan Zinke’s overture to sportsmen — an executive order “to enhance and improve the quality of big-game winter range and migration corridor habitat on federal lands” — rang hollow. No sooner had Zinke signed the order than the Interior’s BLM proposed oil and gas lease parcels for sale inside the Red Desert to Hoback migration corridor — the longest mule deer migration ever recorded.

Although Gov. Matt Mead has urged the BLM to reconsider leasing in Little Mountain and the Red Desert to Hoback corridor, he and other elected leaders in Wyoming support many aspects of an energy dominance policy — which influences the actions of our state agencies. For example, the state’s wildlife and environmental quality officials are often reluctant to hold the line — or even weigh in — on efforts to roll back detailed, science-based wildlife stipulations and air quality measures carefully crafted under previous administrations. This is particularly concerning to those who live and hunt in eastern Wyoming, where the 5,000-well Converse County Oil and Gas Project (and other big drilling projects) are slated for approval within the next year.

And in July, Wyoming’s Office of State Lands and Investments offered dozens of oil and gas lease parcels in the Northern Red Desert — home to crucial winter habitat for big game, national historic pioneer trails, wilderness study areas, North America’s largest sand dune complex, and dozens of other historic, cultural, and natural resources. One parcel was even situated in the shadow of the iconic Boar’s Tusk.

These federal actions and policy changes are coming fast and furious. And they complicate nearly every aspect of our program work. Read on to learn what the Outdoor Council is doing to address these challenges and why we need your help.

In 2015 the BLM finalized rules to limit the venting and flaring of natural gas, and required inspections of leaky equipment for new oil and gas wells. Because the pollutant is also the product for sale, not wasting it makes sound financial sense. Many companies, such as ExxonMobil, agree.

An industry trade group and three states, including Wyoming, sued. We joined public health organizations, conservation groups, and the states of New Mexico and California to intervene in defense of the rule — and successfully stopped the attempt to delay the rule’s implementation.

End of story? Not quite. Under the new administration, the BLM turned 180 degrees and attempted to rescind its rule. We joined partners to successfully challenge this unlawful move and demand that the BLM follow the legally required steps to repeal an established rule. The BLM’s new rule (which we expect will indeed scrap nearly all of the good elements of the 2015 rule) will be announced any day.

In this case, there’s also a state-level solution. For years we’ve urged Wyoming’s Department of Environmental Quality to issue its own guidance requiring companies to regularly inspect and fix leaky infrastructure in all new oil and gas fields. Wyoming does have such a requirement — but it pertains only to wells in the Upper Green River Basin. Late this summer we were happy to learn that Wyoming DEQ finally proposed guidance to apply these best practices statewide, and we’re working to make sure the measure is adopted and implemented.

We also want to see Wyoming lawmakers remove the severance tax exemption for flared natural gas, which would generate real revenue for counties and local governments.

Problem: Federal and state oil and gas lease parcels are being offered for sale in some of the most iconic places and most crucial winter big game habitat in the Northern Red Desert.

Solution We Seek: The BLM and the state agree to withdraw and no longer offer oil and gas leases in special places and important habitats.

In July, the Wyoming Office of State Lands and Investments offered dozens of oil and gas lease parcels for auction throughout the state, including 34 parcels in the Red Desert — in remote areas with no roads or infrastructure to accommodate development. The parcels are in or near designated National Historic Trails, BLM Wilderness Study Areas, and critical big game and sage-grouse habitat.

Wyoming’s July lease auction demonstrates the influence of an energy dominance policy on state actions. Once federal lease parcels are offered in undeveloped areas — such as the Northern Red Desert — operators are motivated to nominate neighboring state parcels to shore up congruent lands for development.

The Outdoor Council led an effort asking the state to withdraw the 34 lease parcels identified as a threat to wildlife, cultural, and natural resources. The state withdrew only one it had slated for sale — the iconic Boar’s Tusk. Twenty-one of the state parcels received bids in July. We led another campaign to urge the OSLI board of commissioners not to authorize their sale. Our efforts prompted dozens of residents to testify to the wildlife, cultural, and economic values that would be degraded if drilling in this landscape is allowed.

There is a better way!​ ​We’re reminding state leaders that an exchange of these isolated state parcels for BLM lands elsewhere that are more conducive to development would provide a better guarantee of revenue while protecting this landscape.

We continue to monitor leasing actions by both the state and the federal government throughout Wyoming, and remain ready to defend against shortsighted policies coming out of D.C.

Solution We Seek: The BLM does not offer oil and gas lease parcels here.

Every spring, thousands of mule deer make a 150-mile trek between their winter range in the Red Desert and lush habitat farther north. In the fall, often with fawns, they retrace their steps south.

This February, Interior Sec. Ryan Zinke issued an order to “improve habitat quality” in migration corridors. We applauded the move. But then the BLM announced it would offer multiple parcels inside the Red Desert to Hoback corridor for oil and gas leasing.

That’s a problem. We reminded Sec. Zinke and the Wyoming State BLM office that science shows drilling in vital habitats like migration corridors is harmful to wildlife, and we urged them to pull the parcels before the fall lease sales. We also helped a coalition of sportsmen and conservation partners do the same. And, after thanking Gov. Matt Mead for his initial support of this special corridor, we asked him to be even more vocal in its defense.

We’re also making sure citizens are aware of the problem, and that they know how to help fix it. Participants at our annual Run the Red event and the Tour de Wyoming bike ride — which both intersect with the corridor — were eager to contact Gov. Mead and speak out in its defense. We provided postcards for participants to submit comments to Gov. Mead, and, thanks to the generosity of a WOC member, we provided felt antlers which cyclists donned in a show of solidarity with the migrating deer.

In early August, BLM agreed to defer nearly 5,000 surface acres from potential oil and gas developments that intersect this vital corridor. Although this isn’t everything we asked for, it’s a good start. Thanks to all of you who let Gov. Mead and Sec. Zinke know that Wyoming’s wildlife habitat is worth defending! We’ll keep pushing to protect this and other special corridors.