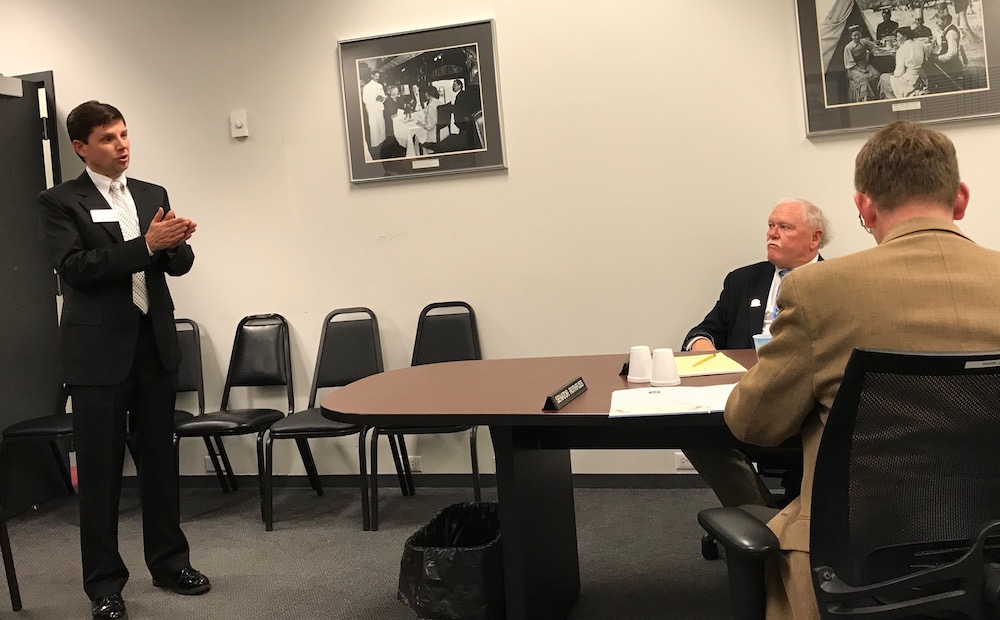 The Outdoor Council is proud to introduce Eric Dalton as one of three citizen lobbyists taking part in our legislative mini-internship program. He joined Outdoor Council lobbyists Stephanie Kessler and Mary Flanderka during the first week of the 2018 Wyoming Legislature’s winter session.

“It’s nice to see tons of high school kids trickling through the legislature, and I feel like one of them — only a little more senior.”

Eric, 50, lives in Cheyenne where he is the data supervisor at Cheyenne Regional Medical Center. It’s his second stint as a Wyoming resident after first arriving in the 1990s. Since returning in 2014, Eric has been active in several local U.S. Forest Service planning decisions, and consistently engages in Cheyenne City Council matters, such as water development on Belvoir Ranch.

He grew up on the East Coast, the son of a career U.S. service member, and had access to large swaths of military properties where he could “piddle” around outdoors, and developed a love for nature. He served in the Air Force for 24 years, has lived on five continents, and says he has seen the effects of climate change firsthand. In his international travels he was struck that many places in the world don’t have a public lands concept as we do in the United States.

“I first moved to the Rockies sight unseen, and I was enamored,” Eric said. “Out east all the land is private, and [in the Rockies] I thought, ‘What a concept. You can go out and camp any ol’  place you want to on a national forest.’ You have to know somebody who owns land to go hunting out east.”

Eric considers conservation his second or third profession. He belongs to several conservation groups in the Rockies. “The great outdoors of Wyoming are unparalleled,” he said.

His experience as an Outdoor Council legislative intern has reinforced his sense that Wyoming is one small town with very long streets. “Wyoming is hyper-democratic because you can still talk to your representative or senator, and you can actually give input . . . There’s so much opportunity to weigh in.”

Eric said the Outdoor Council internship will energize him to be even more involved in civic matters. He said he wants to demonstrate that Americans don’t have to be put off by politics. “They can have impact,” he said.

This is the Outdoor Council’s first year hosting the citizen lobbyist mini-internship program. The goal is to offer a full spectrum of lobbyist training, and to empower participants to return to their communities as engaged and effective conservation advocates. Also joining our 2018 internship program are Era Aranow and Robert Joyce.