This is part two in a two-part series by Amber Reimondo, Outdoor Council Environmental Quality Advocate, on fugitive methane emissions during oil and gas production and how we can fix the problem. Click here for part one.

I’m on a tour in western Wyoming’s Jonah Field and I ask my host, Paul Ulrich, Jonah Energy’s Government and Regulatory Affairs director, why his company has chosen to go beyond even what Wyoming’s existing air quality regulations require. Jonah’s fugitive methane leak detection and repair program can be a model for others. “Leak detection is a priority for [Jonah Energy],” he said, “because we keep our employees safer, reduce emissions and capture more gas to sales through our program.”

There are good reasons why Jonah Energy sees leak detection and repair (formally known as fugitive emissions monitoring or FEM) as a winning investment.

It’s a win for the company’s employees who are safer on the worksite if leaking odorless, colorless methane gas—an explosion hazard—is discovered and capped.

It’s a win for air quality. Methane is an incredibly potent greenhouse gas. Additionally, volatile organic compounds, which can be a component of fugitive emissions, react with nitrogen oxides (NOx) and sunlight to create dangerous ground-level ozone. Ozone problems have plagued the rural Upper Green River Basin and its residents for years and are only now, after enforcement of stricter regional regulations (and combined with a downturn in drilling activity) beginning to show signs of improvement.

Detecting and fixing leaks is also a win for the company’s bottom line. Even in today’s slumped natural gas market, Jonah Energy’s FEM program continues to pay for itself with the sales from the gas the company saves.

The State of Wyoming and county government (and ultimately residents) also benefit from the taxes and royalties earned when the gas is sold instead of lost to the atmosphere. This is especially important given the crunched state of Wyoming’s budget today.

Leaks happen, even to the best equipment

Paul and I talk a little more about the cost savings. The net benefit from recovered gas sales is reliable. Paul explains that leaks are just “part of the nature of equipment” so they can occur no matter how new the fitting and regardless of whether the gasket was fully functional when someone last checked it. Without regular inspections and maintenance, undetected leaks can lead to an enormous waste of an important and finite resource.

While leaks are inevitable, Jonah Energy’s inspection records illustrate that through regular and frequent instrument-based inspections, it is possible to decrease the number and severity of leaks overall. Frequent inspections allow the company to identify even the smallest leak right away and to identify trends in designs or brands that consistently malfunction as well as those that more consistently function as designed. Jonah Energy’s monthly inspections allow the company to remain on top of small maintenance problems before they become big ones, and as a result, just like a well-maintained vehicle, the likelihood of experiencing an unexpected, major equipment failure decreases.

Since starting the program in 2010, Jonah Energy has seen a trend that shows leaks are becoming less prevalent and less severe thanks to its regular, frequent inspections and maintenance—even as total well numbers have increased. (According to Jonah Energy, the decrease in number of site inspections over time in the chart below is due to consolidation – more wells on one pad – not less wells.)

At the moment, the Jonah field is the nation’s 8th largest producing natural gas field. It was ranked even higher before the downturn in the market. The resource is drawn from a multitude of layered tight sandstone lenses (imagine stabbing a straw down into a bowl of potato chips and trying to hit as many chips as possible) anywhere from ten to thirteen thousand feet beneath the surface. It’s this geology that initially made directional drilling a challenge for developers. Even though technology has advanced and more wells can be consolidated and drilled from a single well pad, the sheer density of production sites in the Jonah Field is not an image you’ll soon forget once you see it.

After the BLM approved the Jonah Infill Project in 2006, up to 40 wells per acre can now be drilled over the relatively small 30,500-acre project area. This presents both a challenge and a blessing from a site-by-site inspection standpoint. It’s a challenge because at the moment, Jonah Energy is inspecting 136 individual production and compression facilities every month. But at the same time 30,500 acres is a relatively small gas field – during the tour, we drove the width of the field in about ten minutes and its length in about twenty.

Jonah Energy employs four full-time employees who are equipped with their own infrared camera and charged with monthly inspections of all facilities. These employees have prior experience working on well sites, so they’re often able to repair leaks themselves rather than order in a crew.

Outside his office, Paul introduces us to Caesar Deiaz, one of the team of four inspectors Jonah employs. Caesar is holding something that looks like my parents’ 1995 camcorder. It’s his Flir camera. He flips a switch on the camera and it starts to make a steady electronic sound. Caesar laughs and notes that it’s the camera starting its required ten minutes to cool down, not warm up, before he can use it.

While we wait for the camera to boot up, Caesar sits us down in front of his computer for a look at a portion of a 45-minute video from one of his recent site inspections. At first, the video seems pretty bland. Everything is black and white and the first thirty seconds are mostly a shot of blurred gravel as Caesar walks from the outer edge of a well pad up onto a metal grated walkway that carries him through the facility. The inspectors always record a solid, uncut video at every site to prove that the entire site was inspected and that no leaks were found and omitted from the clip. For several minutes, Caesar’s camera rolls over and pauses at a pipe here, a hatch there, a fitting over here and nothing seems out of the ordinary. But then, we see it. The camera pauses over a hatch and something that appears as black smoke can be seen flowing from a damaged gasket. It’s a gas leak. Caesar zooms in to get a better look at its source and then continues the rest of his inspection before coming back to make the repair. This leak would have been invisible without the use of his Flir camera. I ask Caesar how often he finds leaks like this. “Every day,” he says. 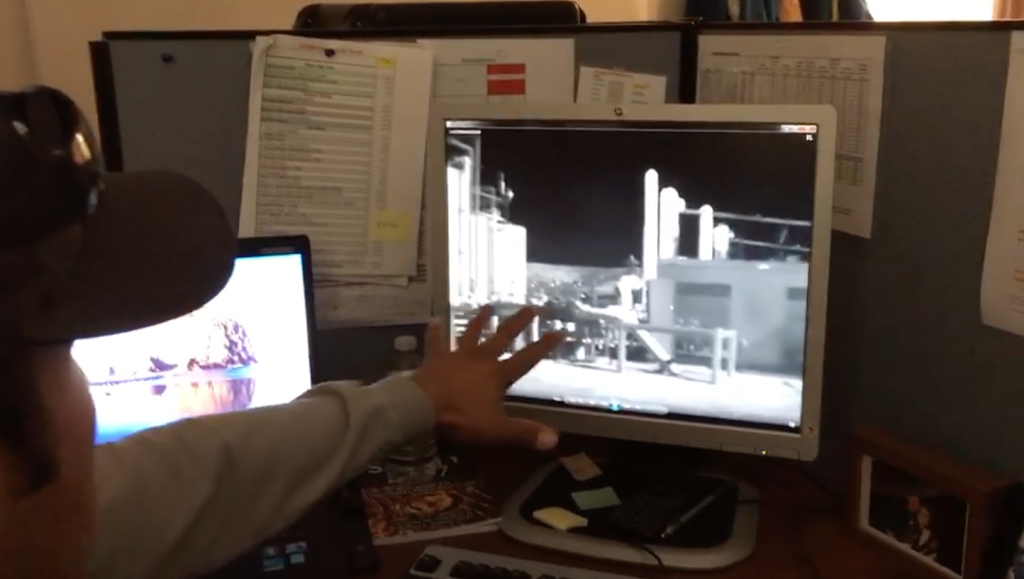 In addition to finding and repairing the leak, Caesar will also “bag” it to get a leak rate using a separate instrument capable of measuring volume. He’ll take that rate back to his colleague at the office who will translate it into an approximate total leaked volume. That volume is important for the company’s records because it helps employees understand how much gas was saved by repairing the leak. They can compare that to the cost of running the program and that’s what allows them to say with confidence that the program more than pays for itself. Along with volume data are those long internal lists of equipment designs that seem to work better or worse than others, which Paul proudly states Jonah Energy happily shares with other operators or regulators who ask because, “it’s in everyone’s interest to know and use this information.”

In addition to Jonah Energy’s inspection program, its data collection and tracking also exceed existing state regulations. The company’s data inform its operations and business decisions, but also provide the rest of us with an important window into the reality of fugitive emissions and what it takes to address them.

Paul notes that Jonah has pursued their monthly FEM and data tracking program because it works for them, and that every company and gas play is different. But he also says that a requirement for these instrument-based inspections on just a quarterly basis – something that is now in place in the Upper Green, but that the Wyoming Outdoor Council and others are urging the Department of Environmental Quality to require statewide—are both “reasonable and feasible.” Jonah’s more robust leak detection program demonstrates what is possible when a company prioritizes Wyoming’s environment and its people, along with its own bottom line.

Thank you to Paul Ulrich, Caesar Deiaz and Jonah Energy for sharing their leak detection work with us.