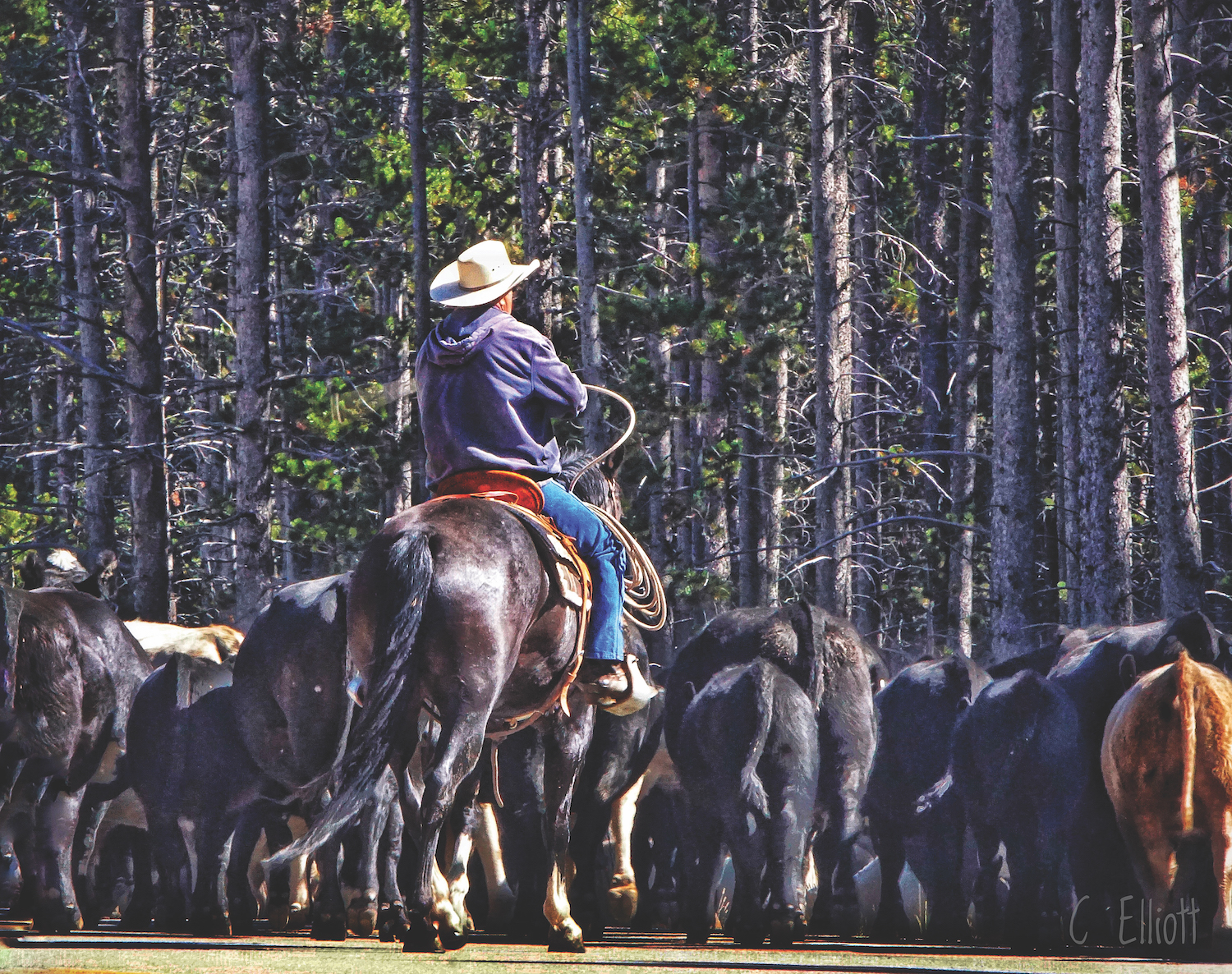 One day last summer, Larry Hanft, owner of Little Tongue Ranch south of Dayton, Wyoming, needed help. So he turned to his summer neighbors and new friends Cheryl Elliott and her husband Matt. Cheryl and Matt spend their summers on land owned by the Hanft family just south of Burgess Junction.

The Bighorn National Forest has been a mainstay for ranching families for years. About 21 percent of the public land on the forest is used as rangeland. Larry and his family had grazed cattle here since 1992, but never had a picture taken of this work. That would be Cheryl’s job, while Matt would be helping with the cattle drive.

It was a crisp morning in late September when she headed out to meet Larry, his five cowboys, her husband, and the herd of nearly 400 Charolais-Angus cattle as they made their way east across national forest land. They had already been up for hours, rounding up cows and calves on horseback from the open meadows south of Burgess Junction where the herd had been grazing all summer. Their goal that day was to get the cattle to Turkey Creek near Steamboat Rock, before continuing to Dayton the next.

Instead of grasping leather reins, Cheryl held the leather of her camera strap, ready for the moment the cattle emerged from the lodgepole pines to head down Highway 14-A, guided by the prods of Larry and his team.

It was a noisy day, she recalled — cows calling to their calves, the clap-clap of hooves on pavement, the rustle of hundreds of bodies in the forest, the occasional whap of a rope, leather shifting in saddles, yells between men.

What surprised and delighted her was the synchronicity of the movement, the pure orchestration of the process — something she only realized once her eye was behind the lens. She came away with an even deeper respect for Larry, for ranching, and for the way of life she witnessed.

“He’s the hardest working man I’ve ever met,” she said. “You’d be hard pressed to find someone who works as hard as he and his team does.”

“What I thought was really neat was the way Larry was so cognizant of his role,” she continued. “He was constantly aware of trying to be not only a good steward of the land, but also to the people we interacted with. He says he always worries that people are getting upset because the cattle drive slows their progress up the highway — but what I saw were people not feeling inconvenienced but grateful for the chance to get to experience a true cattle drive.”

Larry is part of a proud culture of modern ranchers who still drive their cattle from winter to summer pastures. It’s a tradition that has lasted for hundreds of years in Wyoming, where the terrain remains too rugged or wild for motor vehicles and a working rancher is the only way to get the job done. Because of this reliance on the land to make their living, most ranchers know firsthand the importance of conservation, and form deep connections with the landscapes they move through.

“Ranchers are great stewards of the land,” Cheryl said. “We all — ranchers and outdoor recreationalists alike — want to preserve and keep our national forest land as pristine as we can. Conservation and ranching really do go hand and hand.”

She said that’s what she admired about groups like the Wyoming Outdoor Council.

“There’s a middle ground,” she said. “We’re all just trying to keep everything that we love where we live intact and better it, if possible.”

Even before she took pictures of Larry that day, Cheryl had been capturing the working landscape of the Bighorns. Something about it was always alluring to her.

“Every year, I try to take some pictures of cattle grazing in front of Twin Buttes, or some spectacular backdrop,” she said. Ranching is “truly another part of this national forest, and I want to show people that there’s beauty in that, too.”

Join Cheryl and other photographers by submitting your own shot of Wyoming for the Outdoor Council’s 2020 Calendar Contest. You can enter your photos via Instagram or email. To submit your photo(s) via Instagram, you must have a public Instagram account so that we’re able to view your submission. Upload your photo(s) and add the hashtag #MyWyoming.

For more information about the contest, visit our Calendar Contest page.