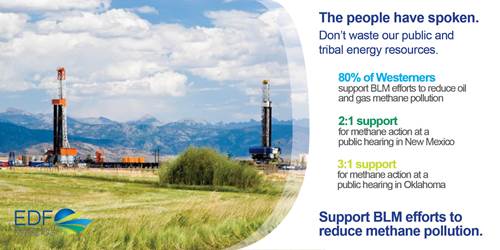 This guest column by Jon Goldstein, with the Environmental Defense Fund, provides an excellent look at the BLM’s methane rules in advance of two hearings this week in North Dakota and Colorado.

These numbers don’t lie. They represent the strong support new methane waste and pollution reduction rules from the Department of Interior’s Bureau of Land Management enjoy across the west. Methane is a potent climate pollutant and the main constituent of natural gas, so when oil and gas companies on public land allow  methane to be leaked, burned or vented to the atmosphere, it not only impacts air quality and our climate, it also represents an economic loss to taxpayers.

Here’s how this math adds up to a win for taxpayers, public health and the climate.

Two (or Three) are Better Than One

Last week the BLM kicked off its public comment process for important new rules designed to limit methane waste from oil and gas operations on Federal and Tribal lands.  The agency held hearings in Farmington, New Mexico and Oklahoma City seeking input from the public on the proposal. Despite the fact that both New Mexico and Oklahoma  are in the heart of oil and gas country, comments in support of these new rules outweighed opposing viewpoints by significant margins in both locations. More than twice as many concerned citizens in Farmington and three times as many in Oklahoma City testified in support of BLM taking action on methane.

Supporters out-commenting the opposition two- and three- to-one in the oil and gas patch, and dozens of elected officials endorsing sensible rules in a major oil and gas producing state are indicative of the strong, broad and diverse support that BLM’s proposal is garnering across the West. It’s not surprising then that a recent poll found that a bipartisan majority (fully 80 percent) of Westerners support commonsense rules to cut oil and gas waste on BLM managed lands.

A big reason for this support: Westerners understand that wasting our natural gas through venting, flaring and leaks not only pollutes our air and damages our climate; it shortchanges taxpayers by millions of dollars each year. BLM doesn’t collect royalty payments on natural gas that escapes to the atmosphere before being sold; therefore local communities lose out on funding that could have gone to better schools, roads and other needed infrastructure. In fact, according to a recent report, taxpayers could lose out on $800 million over the next decade as a result of the wasteful venting and flaring of natural gas.

BLM’s proposal is a strong step toward better management of our energy resources. But there’s room for improvement especially to provisions that could and should require oil and gas companies to inspect sites for methane leaks on at least a quarterly basis as leading states require.

While some are asking for more delays, we think the time to act is now. Join us in getting the strongest possible BLM methane rule across the finish line by filing comments before the BLM deadline on April 8 and offering public testimony at the BLM’s final two public hearings in Lakewood, CO on March 1 and Dickinson, ND on March 3rd. We’ll be there, joining the fight for better climate protections, reduced waste, and cleaner air.