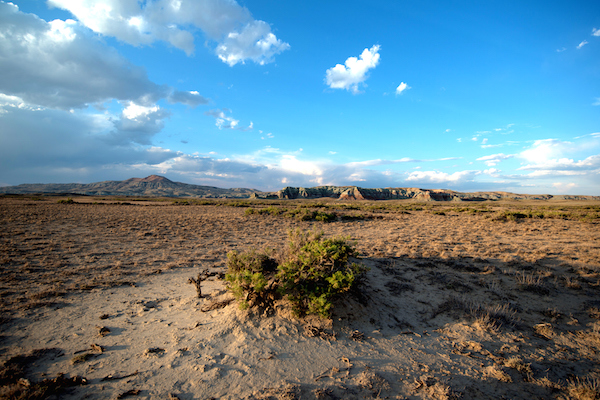 A vast region of public lands in Wyoming—from the southern edge of the beautiful Upper Green River Valley, down to Flaming Gorge, and across the northern Red Desert to the stunning landscape of Adobe Town—will have a new land-use plan in the next few years. Public land managers are working on this new plan right now. To help inform that process, the Wyoming Outdoor Council and our partners have identified five priority landscapes that deserve to be protected within this new plan. Check them out!

The big open spaces and wild lands in the Northern Red Desert are beguiling both for their wide-ranging colors, textured badlands, and rugged buttes. Photo: © Scott Copeland Images

From the towering Oregon Buttes to the Great Divide Basin, it was the Northern Red Desert’s open spaces that provided solace for Wyoming Outdoor Council founder, Tom Bell, during his recovery from injuries sustained during his military service in World War II. Protecting the Northern Red Desert is part of the Outdoor Council’s DNA, and it is at the heart of our mission. Home to a rare, resident desert elk herd, wintering migratory elk, pronghorn, greater sage-grouse, dozens of sagebrush dependent animals and birds, golden eagles and other raptors, among other wildlife, the Northern Red Desert is a place like no other. The longest known mule deer migration corridor—the Red Desert to Hoback—starts here each spring and thousands of deer arrive again each fall to spend the winter in the wind-swept Leucite Hills. 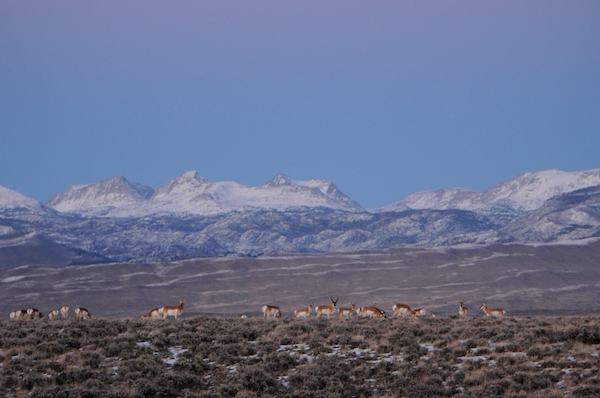 The Big Sandy Foothills are hands-down one of the most valuable and essential refuges for our migratory and resident big game herds—from mule deer, to elk to pronghorn—and for many other critters that depend on sagebrush. Photo: Joe Riis

Providing critical habitat for several big game species, sagebrush dependent birds, and other wildlife, the Big Sandy Foothills are known to local land and wildlife managers as “the Golden Triangle.” This triangle of land epitomizes the sagebrush sea: rolling hills rise to the forest-clad Prospect Mountains. Behind the Prospects, the Sweetwater River exits the Wind River Range before it winds through the Foothills and edges east along the northern Red Desert. The Red Desert to Hoback mule deer migration passes through the Foothills, and picks up thousands of deer that wintered among the Prospects.

Hunting opportunities are rich, as are hiking, camping, and wildlife watching. Additionally, the National Historic Trails corridor, encompassing the Oregon, California, Mormon and Pony Express traverses the Big Sandy Foothills. One of the most significant sites on trial, the Parting of the Ways, is in the Foothills; here, trails diverged and some Oregon emigrants headed straight west rather than following California and Mormon emigrants south to Fort Bridger.

A complex of pine, aspen, and juniper-clad mountains rising above the Flaming Gorge and high desert, the Little Mountain area is a paradise for big game hunters. This is where hunting and fishing traditions are passed down generation to generation. Fast-running cold-water creeks ripple out of the high country. Currant, Red and Sage Creeks even host Colorado River cutthroat trout. The summits of Pine, Little, Richards, and Millar mountains offer extensive views of the high country, surrounding desert, and the red rocks of the Gorge. The Red Creek Badlands Wilderness Study Area is renowned by those adventurers seeking solitude by hiking or cross-country skiing. 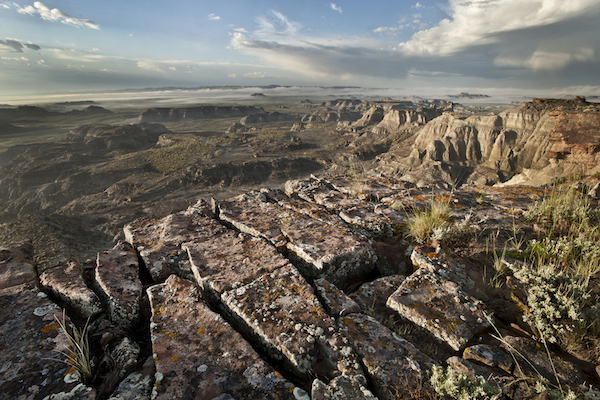 The wild lands of Adobe Town and its wind-etched rock formations have sheltered the secrets of those seeking solitude and solace—from Butch Cassidy to modern day adventurers. Photo: Ken Driese

The wild heart of the southern Red Desert. Adobe Town is home to the largest wilderness study area in Wyoming—badlands, buttes, hoodoos, and eroding sedimentary rims combine to create a breathtaking landscape worthy of a national park. Butch Cassidy and his gang sheltered in the Haystacks, to the north, and Powder Wash, to the south. Open spaces stretch west to Kinney Rim, which is renowned by big game hunters and hikers seeking solitude and stunning views. Though difficult to access, visiting Adobe Town is well worth the effort.

When you want to get away from modern life, head to the backcountry of Devil’s Playground, which is rarely visited. You’ll be utterly alone with your thoughts, the wind, and the rich history of people who traveled this playground hundreds of years before you. Photo: Soren Jesperson

The Devil’s Playground area is a secret gem. With its two wilderness study areas (including Twin Buttes) and views of Black and Cedar Mountains, just west of Flaming Gorge, this playground’s towering buttes provide excellent wildlife habitat above the surrounding sagebrush sea. The wild character of these wind-swept buttes, scattered with teepee rings, stands in stark contrast to the busy shores of Flaming Gorge. For those wanting to get off the beaten track and not encounter another person while wandering in the desert, Devil’s Playground is the ideal destination.