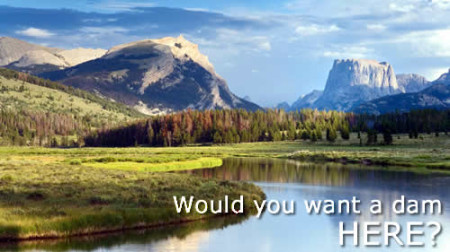 The Wyoming Outdoor Council asks for your help in telling Governor Mead that new dams, particularly two suggested on the Upper Green River, are not the answer to water security in Wyoming and should not be a part of the final Wyoming Water Strategy.

The Outdoor Council believes more secure water supplies will come with proactive management decisions that stem from access to good information and lead to greater water conservation and resource protection. Construction of new dams does not fit within that framework.

Impacts to Wild and Scenic Qualities

Especially notable, is that the river corridor of the Upper Green provides a regionally important migration route for wildlife, particularly for pronghorn that winter in the Upper Green River Basin and migrate north toward Jackson for the summertime (USFS, Wild and Scenic River Eligibility Evaluation, Bridger-Teton National Forest). The path that the pronghorn take along the Upper Green River travels through both suggested dam sights and is part of one of the longest large mammal migration corridors in North America. The section where the Green River Lakes Reservoir would be located is known as “the funnel” of the migration corridor. This is where a narrow water gap was created by the Green River and where pronghorn numbering in the hundreds must travel each spring in order to make their way further north. Damming this area would impose yet another obstacle, a likely impassible one, for a vital migration route already threatened by oil and gas development further south in the Upper Green River Basin. If this happens, pronghorn will likely disappear from valuable places such as the scenic Grand Teton National Park (“Pronghorn Migration on The Path of the Pronghorn,” Wildlife Conservation Society).

Additionally, downstream from either of these suggested dams, the Green River itself as well as other existing dams would continue to see impacts.  Dams are finite structures and cannot function in perpetuity. As the river velocity decreases approaching a dam, sediment and debris naturally carried by the river are dropped resulting in siltation at the mouth of the reservoir. Siltation is an inevitable occurrence and will eventually fill the reservoirs behind the dam. Siltation can happen more quickly in areas with more debris and sand for the river to carry, further decreasing the lifespan of a dam.

When debris is trapped behind a dam, siltation is not the only problem. Riverbeds downstream become stripped of the organic materials that would normally flow into and through them. Trapped debris can no longer create wildlife and water insect habitat in the river corridor nor enrich soils along the riverbank. With fewer structural materials such as logs and rocks to slow the river in places, a stripped stream bed results in enhanced erosion of the downstream river channel. In turn, unnaturally high erosion can result in excessive sediment loads traveling downstream to be stopped behind the next dam and contributing to siltation there. As you can see, the impacts of dams are increased not just to rivers, but other infrastructure too as more dams are placed along a river channel.

Significant impacts to fish and wildlife and further degradation of the already imperiled larger Colorado River Basin are not the solutions to our water concerns. In fact, they will likely only exacerbate them. Please help us deliver this message by August 4th, 2014 and ask Governor Mead not to pursue dams on the Upper Green River.