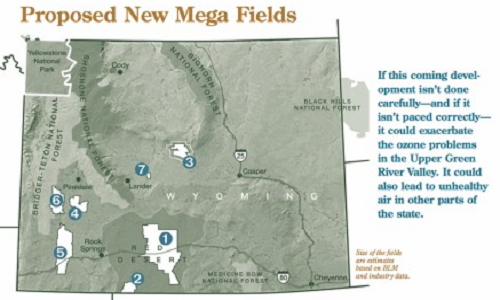 Click on the image above to view a higher-quality PDF image.

At the very end of 2012 the Bureau of Land Management released a draft environmental analysis of a proposed gas drilling development in south-central Wyoming—the scale of which we’ve never seen before.

Most people in Wyoming are familiar with the Jonah Field near Pinedale. If you can picture that field, imagine a project area about 30 times bigger and more than 2 and 1/2 times the total number of wells drilled.

Put another way, the Jonah Field covers an area about twice the size of Providence, Rhode Island. This new project would be bigger than the entire state of Rhode Island, and it would be one of the largest single natural gas field developments in the United States.

This 9,000-well behemoth—proposed by BP and Called the Continental Divide-Creston project—is the first of a new wave of “mega fields” about to hit Wyoming.

We’ve known about the potential for this wave for several years—but 2013 is the year it starts crashing on the beach.

If this coming development isn’t done carefully—and if it isn’t paced correctly—it could exacerbate the ozone problems in the Upper Green River Valley. It could also lead to unhealthy air in other parts of the state.

In the winter 2011 issue of our newsletter, Frontline, we coined the term “mega fields” to describe the numerous proposed natural gas fields that are working their way toward approval in western Wyoming.

As we discussed in that issue, eight huge natural gas development projects proposing to drill more than 24,000 wells on more than 2.5 million acres of mostly public (and some private and state) lands are in various stages of approval by the Bureau of Land Management.

Now these projects are becoming reality. Therefore it is important that the BLM hear your voice so that these projects do as little environmental damage as possible. It’s imperative that the agency applies the lessons we’ve all learned in recent years.

The draft environmental review for the mammoth Continental Divide-Creston project (8,950 wells) in the Wamsutter area is out for public review with a comment deadline of March 6. We alerted readers to this project at the end of January—you can find that article here.

We also submitted our official comments jointly with the Environmental Defense Fund and others. These comments include an independent air quality analysis.

You can read those comments here.

This GoogleEarth image shows the heart of the Jonah Field, which, compared to this proposed project had roughly one-third the number of wells approved. While the Jonah has more well pads relative to wells (on roughly 30,000 acres), the Continental Divide-Creston project will cover more than 1 million acres.

In our comments to the BLM, we articulated serious concerns about potential air pollution, which, if managed improperly, could be dangerous for local residents and workers.

We also urged enhanced protection for lands in the area, including important wildlife habitats for pronghorn and sage-grouse.

Wyoming’s Upper Green River Basin area near Pinedale has been plagued by dangerous smog in recent winters as a direct result of pollution from the nearby Jonah and Pinedale Anticline gas field developments. We are arguing that it is imperative to guard against this kind of pollution in this new development.

“With a project this large, and this close to an existing area of unhealthy air pollution, it is imperative that the BLM gets this right,” said Jon Goldstein, the Environmental Defense Fund’s senior energy policy manager, in a joint media release today. “The BLM must ensure that it takes every measure it can to protect air quality, including doing some commonsense things like detecting and controlling pollution leaks from equipment.”

We assembled our comments with an internal team of legal and scientific experts as well as with guidance from Megan Williams, an independent air quality expert.

Williams’ assessment found that the BLM’s draft analysis of the project underestimates emissions from project sources, does not consider the likely negative contributions to ozone pollution levels in the nearby Upper Green River Basin nonattainment area, and fails to ensure compliance via adequate emissions monitoring and self-certification requirements, among other things.

As Wyoming Outdoor Council staff attorney, I believe we have to do a much better job of protecting local residents and the people who are going to be living and working in and around this development.

Wyoming citizens have learned some important lessons in recent years from the problems that have arisen in the Pinedale area and elsewhere, including many unanticipated impacts related to mega field developments.

Today, we, and the BLM, know better. So let’s apply the lessons learned to this project so we protect air, water, land, and wildlife.

Since this is largely an infill project in an area with a history of oil and gas development and surface disturbance in the “railroad checkerboard” along Interstate 80, we and our partners are not opposing development in all of this area outright.

However, we do see the need for better projections to mitigate potential environmental impacts and the need for stronger environmental controls and we are urging that some currently undeveloped areas remain undisturbed for the sake of wildlife and wildlife habitat.

Based on the options presented in the draft and corresponding analysis, the groups are recommending that the BLM’s final decision should include the following elements:

Megan Williams’ independent air quality analysis, which has been submitted to the BLM, is available here.

Our full joint comments to the BLM are available here.

More mega fields on the way

A second mega field, the proposed Moneta Divide project (4,250 wells) in an area between Riverton and Casper near Moneta, was recently open for “scoping” comments.

Since this project is not in a Wyoming Outdoor Council heritage landscape we do not oppose it outright.

However, we do believe BLM must “do it right” as it approves this project—meaning it must put in place effective mitigation measures to avoid air pollution, water contamination, and harm to wildlife and wildlife habitat, as well ensure that people are still able to use this area safely for hunting and recreation.

While the scoping comment period on this project just closed on March 4, we would encourage you to submit comments to the BLM anyway. In truth, scoping never closes, and at this stage in the game BLM will not be delayed by comments that are a week late.

Information we have from the BLM indicates we could see the draft environmental reviews for these projects starting toward the end of this year and into 2014. So get ready to participate for the sake of Wyoming, its environment, and our way of life!

We pledge to keep you informed about the status of these projects, and help you engage and influence them.

It is crucial for the BLM to recognize the cumulative impacts of these numerous projects and not treat them as isolated, unrelated projects.

All of western Wyoming will be impacted by these projects. Protecting air quality, especially in the ozone nonattainment area in the Upper Green River Basin, will be a crucial and central issue for all of these projects.

We cannot make the ozone situation in Sublette County worse, or create new ozone nonattainment areas. We also need to minimize harm to wildlife such as mule deer, pronghorn, and the Greater sage-grouse.